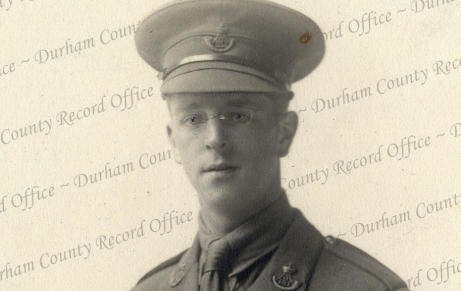 By the end of the war in November 1918, the DLI had grown to 43 battalions, as new Reserve, Service, Territorial, Young Soldier, and other battalions were formed. Of these 43 battalions, 22 served in war zones from the Western Front to the North West Frontier of India.

In August 1914, within days of Britain declaring war on Germany, Lord Kitchener, the newly appointed Secretary of State for War, called for volunteers to join a New Army. Across County Durham and the North East men rushed to enlist.
——————–
On 16 September 1914, over 4,000 recruits left Newcastle for Bullswater Camp, near Pirbright in Surrey. There they were divided into the 12th and 13th Battalions DLI and the 10th and 11th Battalion Northumberland Fusiliers.

Command of 12 DLI was given to a retired officer, Lieutenant Colonel Lincoln Elwes, who had first joined the DLI in 1885. The majority of his officers, however, were newly commissioned and as inexperienced as the men they were to command. The recruits began their military training wearing their own civilian clothes but, eventually, blue serge uniforms were issued. And in late October 100 obsolete Lee Metford rifles arrived.

By late November, rain had made Bullswater tented camp unusable and 12 and 13 DLI moved to Malplaquet Barracks in Aldershot, with later moves to Ashford in Kent, and finally to Bramshott in Hampshire. In February 1915, khaki uniforms and leather equipment finally arrived and by July 1915 rifle training was completed. The battalion was then ready for overseas service.

On 26 August 1915, 12 DLI, as part of the 68th Brigade of the 23rd Division, landed in France and within days was sent into the trenches. The battalion, however, was spared the disastrous Battle of Loos and spent the rest of 1915 and early 1916 in and out of the trenches at Armentieres and Souchez.

In late June 1916, the 23rd Division was moved south to the Somme and 12 DLI entered the fighting south of La Boisselle on 7 July. After spending most of August in reserve at Armentieres, 12 DLI returned to the Somme. On 7 October, assisted by a tank, 12 DLI attacked and captured the Tangle, a complex of trenches and machine guns, east of Le Sars. Some 70 German prisoners were taken but the battalion lost over 30 men killed and 80 wounded. After this fighting, the battalion left the Somme for the Ypres Salient.

In June 1917, after a series of huge mines were exploded under the German trenches on Messines Ridge, 12 DLI took part in the advance, capturing Impartial Trench for the loss of only 15 casualties. The battalion was again in action in September during the Third Battle of Ypres in the fighting on the Menin Road. Then, in October 1917, 12 DLI, as part of a combined French and British force, was sent to northern Italy, where Austrian and German forces had defeated the Italian Army at Caporetto and was threatening Venice.

The 12th Battalion DLI remained in Italy until the end of the war; holding the line on the Piave River; manning the trenches high in the Alps on the Asiago Plateau; before joining the final Allied advance in October 1918 across the Piave. This forced Austria to seek an armistice, which took effect on 3 November. In that final victorious advance, 12 DLI captured 10 artillery guns, 46 machine guns and over 1,000 Austrian soldiers, plus huge stores of ammunition.

In January 1919, the first men from 12 DLI, mostly coal miners, left northern Italy for home and demobilisation, and by the end of February the battalion had been reduced to a single Company, before being finally disbanded.