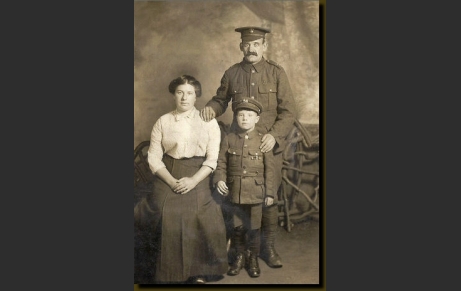 James at 20 years old sought adventure from the coal mines of the North East and joined the 1st Battalion Northumberland Fusiliers to fight in both Boer Wars. He served in England until 9 November 1900 and then in Australia until 22 April 1901 and England again until 6 November 1901. He then served in South Africa during the Boer War until 6 April 1903, Mauritius until 8 February 1906 and finally India until 6 February 1907. He was discharged on 9 February 1907. During these periods he did spend several days in jail for being drunk and disorderly, swearing and using abusive language, however, he also reached the rank of lance-corporal (from 9 June 1902 to 29 Novemeber 1902). On the outbreak of war he re-enlisted in 1914 at Chester-le-Street and was given a new regimental number: 9266.

James enlisted with the 1st Battalion Northumberland Fusiliers, ‘Z’ Company, Newcastle. His medal card notes that he first set foot in France on 3 May 1915. Just over a month later he was killed in action (presumed dead) on 16th June 1915 at Bellewaarde, Ypres. James has no known grave, his name can be seen on the Menin Gate Memorial, Ypres.

The photograph that accompanies this page was taken round about November 1914, just prior to embarkation to France. James is posing with his wife, Margaret Jane and their eldest son James, who is about 6½ years of age and dressed in an army uniform.

His widow was notified that he was missing but he was not declared dead until one year later, she placed this poem in the local newspaper, the Chester-le-Street Chronicle, dated 16 June 1916:

In the bloom of life death claimed him,
In the pride of his manhood days;
None knew him but to love him,
None mentioned his name but with praise;
His smiling face I shall never forget,
Though years may pass away.

As I gaze on your picture that hangs on the wall,
Your smile and your welcome I often recall;
I miss you and mourn you in sorrow unseen,
And dwell on the memories of days that have been.

Oh, how my heart does ache,
When I think of how you died;
To think you could not speak to me,
Before you closed your eyes.

Ever remembered by his loving wife and four children, father and mother-in-law.”

Website dedicated to those who fought at the Battle of Bellewaarde:
http://www.bellewaarde1915.co.uk