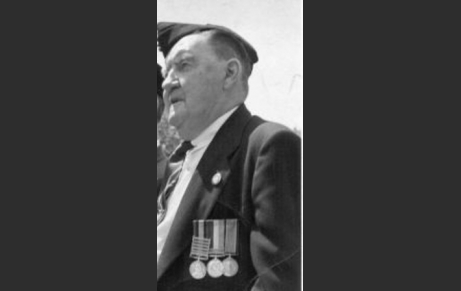 Photograph of Jeremiah Hall Douglass, later in life With many thanks to A. Surridge, from his family collection

Photograph of Jeremiah Hall Douglass, later in life With many thanks to A. Surridge, from his family collection

Jeremiah Hall Douglass, born on 23 June 1879, was the only child of Peter Douglass from Northumberland and Annie Hall of Gateshead. They were married in St Edmund’s Church, Gateshead in July 1875. At the time of the 1881 census Annie and Jeremiah were living at 212 St Cuthbert’s Road and Peter, a railway stoker, was living with his mother in Greenesfield Terrace. Ten years later Jeremiah was at school and living with his Uncle Enoch Douglass also in Greenesfield Terrace.

Spending 12 years in the 1st Battalion Durham Light Infantry (DLI) as Private 6337, Jeremiah fought in South Africa. His Boer War medal includes battle bars for Tugela Heights, Laing’s Nek, Transvaal, Relief of Ladysmith, Orange Free State and Cape Colony. Jeremiah married Violanth Robinson in East Cowton, North Yorkshire in the autumn 1913. The following April he sailed across the Atlantic from Liverpool to Halifax, Nova Scotia on board the SS Arabic and a new life in Canada. He gave his occupation as a crane driver and his intended destination as Sault St Marie, Ontario. Violanth was to follow him six months later, and they settled in Hamilton, Ontario where their daughter Vera was born on 10 December.

On 11 November 1914 Jeremiah enlisted in the Canadian Expeditionary Force (CEF) in Toronto, Ontario and became Private 175060 in the 19th Battalion. His previous military experience with the DLI in the South African Campaign was noted and illustrated by the large tattoo on his chest: “Peace with honour South Africa”. He also had a tattoo on his left forearm of a headstone and the words “in loving memory of my dear father”. The following month he was discharged as “undesirable” and returned home to Violanth in Francis Street. One possible reason for this was that the 19th was already nearly at full strength and someone just as qualified, but maybe younger came along, making Jeremiah redundant. Alternatively, he may have been a reservist for the DLI and liable to call up from his former regiment.

Not to be deterred, on 7 September 1915 Jeremiah enlisted in the 84th Battalion at Niagara Camp as Private 167067. He was then transferred to the 86th Battalion at Toronto and given the new regimental number 175060. Transferred again to the 120th Battalion he was appointed Signals Sergeant in December 1915 but reverted to private after going absent in May 1916 for three days. Then, without ever leaving Canada, he was discharged in June 1916 as a “special case” and returned home to Violanth and their daughter, Vera, in Mars Avenue, Hamilton. His records show that he had been medically discharged “by purchase” but showed no medical problems. It is known that Violanth was epileptic; perhaps this was the explanation.

It was third time lucky for Jeremiah when he enlisted in Hamilton on 2 June 1917. He mentioned that he had served 8 months with the 120th and that he had been discharged. He became Private 2528306 and was posted to the 10th draft, Canadian Mounted Rifles (CMR) Depot. He spent the second and third weeks of this period of his service in hospital with “intercostal neuralgia” . It was discovered that he had suffered rheumatic fever as a child and he was to be placed on “light duty”. Nevertheless, by November 1917 he had embarked for England on board the SS Scandinavian with 11th draft CMR and on arrival was posted to the 8th Reserve Battalion at East Sandling, Kent.

Jeremiah was attached to various brigades and battalions. In June 1918, after his last medical had graded him B3, he was taken on the strength of the Canadian Army Medical Corps first at Witley Camp, Surrey and then 4th General Hospital, Basingstoke, Hampshire as a batman. Admitted there as a patient in April 1919 he was diagnosed with debility that affected his left side and was boarded for return to Canada, where he was demobilized in Toronto on 30 June 1919.

Returning to Violanth and Vera in Hamilton by 1921 Jeremiah had a job as a shearsman in a steel mill earning $900. He remained in the steel industry, retiring in the early 1940s when he and Violanth moved to Freeman. Violanth died in 1946 and Jerry moved to downtown Burlington at the end of the decade before moving to live with Vera and her children.

Jeremiah Hall Douglass died on 6 January 1961 in Sunnybrook General Hospital, Toronto, and the funeral was held on a cold wintry day in Burlington attended by members of the Royal Canadian Legion.

With thanks to:
Anthony Surridge, Canada for family details
Jim Busby, Canada for service information

Jeremiah is buried in Greenwood Cemetery, Burlington, Ontario. Thanks to Anthony Surridge for this later piece of information