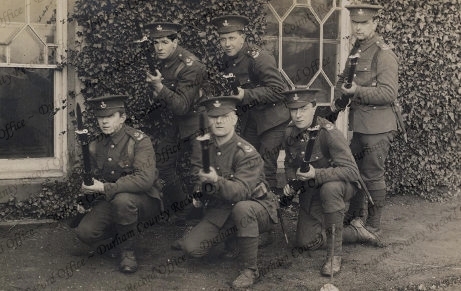 Durham Pals from 'B' Company, 18th Battalion Durham Light Infantry, in training at Cocken Hall. There is no known photograph of William Roberts. DCRO: D/DLI 2/18/24(107)

William Roberts was born on 12 February 1894 in Welton, Lincolnshire, the eldest son of Caleb and Amelia Roberts. He had two younger siblings, Frances and George, also born in Lincolnshire.

William does not appear on the 1901 census with the rest of his family, who were then living at Gretton in Northamptonshire. Ten years later, aged 17, he was living with his grandmother, Frances Bottomley, in Fence Houses, County Durham. He may have moved north to start work for in 1911 he was employed as a gardener on the Lambton Estate. His grandmother was the caretaker for the Lambton office in Fence Houses.

Private William Roberts enlisted in ‘B’ Company, 18th Battalion Durham Light Infantry, on 25 September 1914 and spent the next 15 months training for war, initially at Cocken Camp, only four miles from his home in Fence Houses. The battalion later moved south to continue training at Ripon in Yorkshire and Fovant Camp in Wiltshire.

William kept a diary throughout the time that he was on active service. He started to record his experiences on 2 December 1915, when his battalion was due to go on leave to Durham before departing for France, but there was a last minute change of plan. After a rousing speech from Lord Durham, preparations and a long train ride, the 18th DLI boarded the Empress of Britain at Liverpool, bound for Egypt.

He tells us that the troops were packed into the ship like sardines and he was sea sick for three days, only feeling better when he was able to get above deck and see the sunshine. On 14 December the Empress rescued the crew of a French ship and there was further excitement on 18 December when the ship was followed by a German submarine.

Disembarking at Port Said on 21 December, the battalion set up tents beside the sea. After a week of swimming, parading, and going into town, the 18th Battalion entrained for a new camp near the Suez Canal. The battalion spent the next two months working on the canal defences and getting used to desert conditions.

On 5 March 1916 the battalion was on the move again. The Durham Pals boarded the SS Ivernia (built by Swan Hunter of Newcastle upon Tyne), this time en route for France. They landed at Marseilles on 12 March and William gives a vivid description of the scenery on the journey from the south of France to the Somme region.

By the end of March it was snowing heavily and the battalion was in the front line trenches with rats as big as rabbits, a stark contrast to the conditions in Egypt. When William came out of the line for the first time, he said he ‘came down the street to the billet like a drunken man’ (diary vol. 1, p. 53) and fell asleep immediately. After that he went for a wash in a pond.

For the next three months the 18th Battalion prepared for the Somme offensive, and went into action on 1 July 1916. William Roberts was one of those who went over the top:

‘We were the 4th battalion to go over, which we did about an hour later [8.30am]. The short but terrible rush through the fierce curtain fire with men falling on all sides I shall never forget. High explosive shells fell all round us. The sights I saw are too terrible to write about and men almost blown to pieces were lying side by side. Unable to proceed further, the order to retire was given and I thanked God that I came through the terrible ordeal unhurt’ (diary vol. 2, p. 10).

We don’t know how William Roberts was educated but he was a keen observer of his surroundings and an accomplished writer. He was an avid bird watcher and a religious man, often commenting on the crucifixes that managed to remain standing amidst the devastation of war.

Like many soldiers he wrote poetry when he felt inspired. He wrote a poignant poem in the third volume of his diary:

‘I’m longing for my dear old home
in the land I love so well.
To see the clover on the moor
the pheasant in the dell.
Could I but leave these windswept plains
for the home to me so dear
but though my thoughts are ever home
That home has sent me here…’

Private Roberts was able to go home on leave in May 1917. By 2 June he was back in France and according to his last diary entry on 13 June 1917 he was having a day off from the working parties carrying trench boards at Point du Jour near Arras. Two days later he had died of wounds.

The war diary for the 18th DLI does not record any casualties in the days leading up to 15 June, but the battalion was on the front line and it is possible that William fell victim to enemy artillery fire. William Roberts was buried at Duisans British Cemetery, Etrun. He had probably been taken to the nearby 8th Casualty Clearing Station.

Follow the link at the bottom of this page to read William Roberts’ diaries.