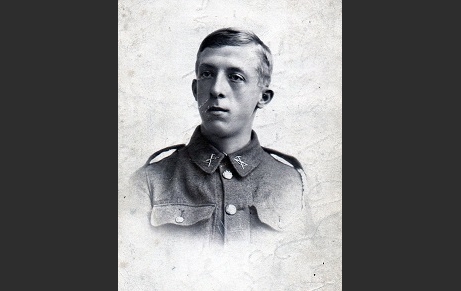 John William Greener was born in 1897 into a very popular and socially active family of Craghead. Henry and Annie Clara, his parents, had joined Craghead’s community only seven years before, in 1890, but, by the time of John William’s birth, they had entered so fully into the life of the village that Henry was not only an esteemed colliery clerk but also a local preacher.

In 1901 John William was a three-year-old school boy and lived in 8 Edward Street with his parents, his sister Mabel Annie, his older brother Henry and little Herbert, only one year old. By the time of the next census, in 1911, he was still at school and his youngest sister, Lilian, had joined the family three years before.

There are no further records of John William’s life before the outbreak of war but it’s likely that he started working as an apprentice as soon as he left school, like his brother Henry had done. What is recorded, however, is that when he was called up, in 1915, he was still living with his parents in Craghead and was employed as a joiner.

John William enlisted on 21 July 1915 and joined the 19th Battalion Northumberland Fusiliers, first as a lance corporal and then as corporal afterwards. After almost 13 months at home, he was eventually sent overseas and arrived in France on 10 August 1916.

There is little information about what happened to John William when he was on active duty and all that is recorded is that he was both gassed and shot in his face. Despite this, however, his most serious health problems seems to originate in the life he was forced to live in the trenches and so he was sent back to England on 16 April 1917.

Two days before his arrival, on 14 April 1917, his older brother Henry, 2nd Lieutenant in the 6th Battalion Durham Light Infantry (DLI) and also on active duty in France, was killed in action near Arras. According to The Stanley News of 26 April 1917, when the news of his brother’s death reached Craghead, John William was lying “badly wounded in Bradford, where he was recently visited by his parents”. “He is expected home shortly to recuperate and will, we trust, be speedily restored to health”, continued the article’s author.

Despite these hopes, John William didn’t get better and on 4 June 1917 was discharged as medically unfit because of an “aortic heart disease” originated in France in April 1917 (Discharge papers). According to the doctor, his condition was a “result of active service” due to “overstrain in trenches” and was “permanent”; his “sickness” was certified with a War Badge by the end of the month.

While his father Henry was still actively contributing to Craghead’s community’s life taking part in official events like Private Michael Heaviside’s homecoming, John William’s health was getting worse day by day. All that’s known about the short time before his death is what was written in The Stanley News on 13 March 1919 to inform of his funeral. Unfortunately, according to the journalist, John William “had never been in good health since his discharge from the Army, after being wounded and gassed”.

He died on 6 March 1919 and, as reported in the article quoted above, the funeral was one of the largest ever held in Craghead. The cortege was headed by the West Pelton Salvation Army Band who played the Dead March and the coffin was draped with the Union Jack. Henry and Annie Clara, Mabel Annie, Herbert and Lilian were all there to cry for the second beloved son and brother that the war had taken away from them.

John William Greener was buried that day in St. Thomas Churchyard in Craghead and lies there together with both his parents and his younger sister.

Profile including photograph on “Find a Grave” website:
http://www.findagrave.com/cgi-bin/fg.cgi?page=gr&GRid=160304019