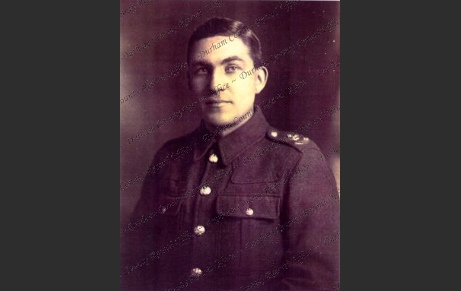 Charles Herbert Moss was born in Sunderland in the first quarter of 1880, to parents John and Margaret Moss. He had an older brother, John, and a sister, Sarah. On the 1881 and 1891 censuses the family was recorded as living at 53 Tees Street in Bishopwearmouth, Sunderland.

In 1901 Charles was described as a boot shop manager in Seaham Harbour, and he was boarding with William J White at 47 Marlborough Street. By 1911 Charles, aged 30, was still single and working as a boot salesman in Chester-le-Street. He was listed as a boarder in Joseph Grundy Usher’s household at Grove Cottages, Chester-le-Street.

From Charles’s memoirs we also know that before 1914 he spent some time working in the Merchant Navy, ‘especially my holidays on the continent with the Londonderry boats out of Seaham Harbour’. One of the places he visited was Hamburg.

Charles Moss responded quickly to Kitchener’s call for volunteers after war was declared. He enlisted in Durham City on 25 September 1914 and within days he had joined the ‘Durham Pals’ of the 18th Battalion Durham Light Infantry at Cocken Hall, near West Rainton, for training. He was in No 9 Platoon, in ‘C’ Company.

Charles was part of the detachment of soldiers defending Hartlepool when the town was bombarded by the German Navy in December 1914. The Durham Pals were trained and ready for action by the end of 1915, however their first posting was quite unexpected. They spent the first three months of 1916 in Egypt guarding the Suez Canal and it was only in March 1916 that they embarked for the Western Front.

We do not know much about Charles’s education but he was an accomplished writer and contributed several articles to local newspapers from 1915 until the early 1960s, not long before he died.

He had a burning desire to tell the story of the First World War through the eyes of an ‘other ranker’ so that the experiences of a British infantryman could be properly understood. Several pieces of his writing survive but it is his account of ‘My Part in the Battle of the Somme’ that is most moving.

Charles Moss was with 18 DLI on 1 July 1916. He was in ‘C’ Company, which was in reserve, along with ‘A’ and ‘B’ Companies, and therefore escaped the fate of the ‘D’ Company men who went over the top with the Leeds and Bradford Pals in the first wave of the attack at Serre.

Lance Corporal Charles Moss was in charge of one of the Company’s Lewis Gun teams. There was some confusion over the position of the Lewis Guns and as ‘C’ Company prepared to move forward they were stopped by a message from Headquarters saying that the attack was not going to plan and they were to stay and hold the first line trench. The 18th Battalion manned what was left of the front line from about 9 am on 1 July till about 12 noon on 4 July. Charles looked on this change of orders as one of the several pieces of good luck that helped him to survive the war.

Later in July he was in charge of the Lewis Gun that helped to beat off a big German raid at Neuve Chapelle. In recognition of this he was promoted to Lance Sergeant.

Between August and October 1916, while on one of the breast-work islands at Festubert, Charles was wounded. He was hit in the side by a large size Verey Light rocket, fired accidentally by one of his fellow soldiers, Private Newrick Curry. When Charles came round he arranged with the Medical Officer and Sergeant Major Allen to stay in the trenches so that no charge would be made against Curry for what was a genuine accident.

Further into the Somme campaign Charles succumbed to trench fever. The first symptoms appeared on a march to Rossignol Farm at the end of October and he was evacuated to Graylingwell War Hospital near Chichester. He was photographed there on Christmas Day 1916.

We do not know much more about Charles’s war service because his Army service records do not survive, but he was with the 3rd Battalion DLI at South Shields on 17 February 1918 when he was transferred to the Army Reserve, Z Class.

Sergeant, service no. 18/544
Enlisted in Durham City, 25-Sep-1914
Promoted from Lance Corporal to Lance Sergeant for his leadership of the Lewis gun team at Neuve Chapelle in July 1916
Wounded at Festubert, 1916
Transferred to 3rd Battalion DLI, Z Class Reserve, on 17-Feb-1918

Where girls are few