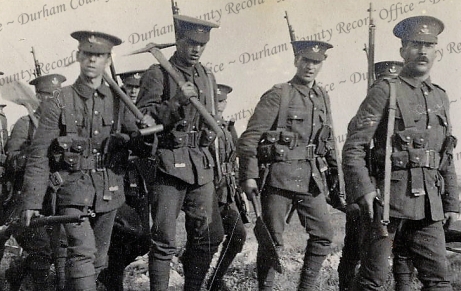 By the end of the war in November 1918, the DLI had grown to 43 battalions, as new Reserve, Service, Territorial, Young Soldier, and other battalions were formed. Of these 43 battalions, 22 served in war zones from the Western Front to the North West Frontier of India.
——————–
The 8th Battalion DLI, formed in 1908 from the old 4th Volunteer Battalion DLI, was a Territorial Force battalion with headquarters in Durham City and eight companies in drill halls in Beamish, Birtley, Chester le Street, Hamsteels, Stanley, Washington, and in Gilesgate and at Bede College in Durham City.

On 3 August 1914, 8 DLI was on annual camp in North Wales with the rest of the Northumbrian Division, when the order came to return home and prepare for war. After arriving back in Durham by train early on 4 August, the battalion moved next day to pre-arranged positions on the coast between Roker and Whitburn. Over the next nine months, the battalion’s part-time volunteer soldiers, formed into four companies, were trained at Boldon, Ravensworth, and Newcastle for full-time active service overseas.

The 1st/8th Battalion, commanded by Lieutenant Colonel John Turnbull of Chester le Street, left Newcastle railway station for France on 19 April 1915. Within days, the raw Durham soldiers were fighting for their lives in the Second Battle of Ypres, suffering heavy casualties from shelling, gas, and infantry attacks on Gravenstafel Ridge and especially during their stubborn defence of Boetleer’s Farm.

As part of the 151st Brigade of 50th (Northumbrian) Division, the 1st/8th Battalion served until August 1916 in the trenches of the Ypres Salient, Armentieres, and Kemmel. The last two places were supposedly ‘quiet’, but the battalion rarely enjoyed days free from casualties caused by shell and sniper fire.

Moved south to join the Battle of the Somme in September 1916, the battalion again suffered heavily in fighting south of Le Sars, and at the Butte de Warlencourt on 5 November. This last attack by 151 Brigade in the mud and the rain failed and 1/8 DLI lost almost 150 men killed or wounded.

During 1917, the battalion fought at Arras in April; took part in a major trench raid at Cherisy in September; and fought during October and November in the Third Battle of Ypres. Another winter was then spent in the Salient’s mud-filled trenches.

On 21 March 1918, when the German Army attacked on the Somme, the 50th Division, including 1/8 DLI, was in reserve. Rushed forwards to the front, the battalion was soon in retreat, along with the rest of the division. Fighting on the River Lys in April further reduced the strength of the battalion. Then on 27 May, the 1st/8th Battalion DLI was destroyed in fighting on the River Aisne.

This was the battalion’s last battle. In June, the surviving soldiers were sent to other battalions and the battalion was finally disbanded in France on 6 November 1918.

Both my Granddads Bernard Carr and Herbert Booth were DLI and fought all the way through WW1, I know my Granda Booth was 1/8th as his medals (MM and bar) say so. My Granda Carr was in signals I believe 1/8th but we have less records although a training camp photo existing with 1/8th Signall on the board. If so, they would both have seen / been part of the 1/8th being ‘destroyed’ in 1918 on the Aisne. Terrible what they must have seen. I knew my Granda Booth well he died in the 1980s and was the kindest man you’ll ever meet. Granda Carr died of cancer in 1940 leaving my dad as second eldest (my uncle Barny slightly later was in the original Parachute Regiment and away serving) was the main family bread winner at 14 in his apprenticeship in Hartlepool docks.
That two surviving members of that battalion who were ‘destroyed’ on the Aisne should have children who eventually met each other (they didn’t know each other growing up as my mum lived in Seaham) and had five children and 8 grand children is the best thing that happened out of that ‘destruction’ none of my brothers and sisters will forget Granda Booth, and we all wish we’d known my dads dad. He must have been something special.