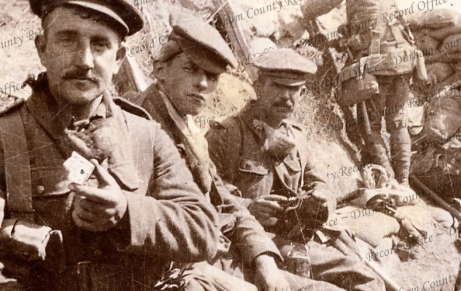 By the end of the war in November 1918, the DLI had grown to 43 battalions, as new Reserve, Service, Territorial, Young Soldier, and other battalions were formed. Of these 43 battalions, 22 served in war zones from the Western Front to the North West Frontier of India.
——————–
The 6th Battalion DLI, formed in 1908 from the old 2nd Volunteer Battalion DLI, was a Territorial Force battalion with headquarters in Bishop Auckland and eight companies in drill halls in Barnard Castle, Consett, Crook, Spennymoor, Stanhope, and Bishop Auckland. On 3 August 1914, 6 DLI was on annual camp in North Wales with the rest of the Northumbrian Division, when the order came to return home and prepare for war. Over the next nine months, the battalion’s part-time volunteer soldiers, formed into four companies (named ‘A’, ‘B’, ‘C’, and ‘D’) were trained at Boldon, Ravensworth, and Bensham for full-time active service overseas.

The 1st/6th Battalion, commanded by Lieutenant Colonel Harry Watson, a well-known solicitor in Barnard Castle, left Newcastle railway station for France on 19 April 1915. Within days, the raw Durham soldiers were fighting for their lives in the Second Battle of Ypres, suffering heavy casualties from shelling and gas attacks at Frezenberg and in the GHQ line, the last trench defence before Ypres itself.

As part of the 151st Brigade of 50th (Northumbrian) Division, the 1st/6th Battalion served until August 1916 in the trenches of the Ypres Salient, Armentieres (where the four companies were re-named as ‘W’, ‘X’, ‘Y’, and ‘Z’), and Kemmel. The last two places were supposedly ‘quiet’, but the battalion rarely enjoyed days free from casualties.

Moved south to join the Battle of the Somme in September 1916, the battalion again suffered heavily at High Wood and Eaucort l’Abbaye, where Roland Bradford took temporary command of the 1st/6th Battalion. Then on 5 November, 151 Brigade attacked the Butte de Warlencourt. In the mud and rain, the attack failed and 1/6 DLI lost over 150 men killed or wounded.

During 1917, the battalion fought at Arras in April and in October and November in the Third Battle of Ypres. Another winter was then spent in the Salient’s mud-filled trenches.

On 21 March 1918, the German Army attacked on the Somme. Moved forwards to the front line south of Peronne, the 1st/6th Battalion was soon in retreat along with the rest of 151 Brigade. Fighting on the River Lys in April further reduced the strength of the battalion. Then, on 27 May, the 1st/6th Battalion with the rest of the weakened brigade was destroyed in fighting on the River Aisne.

This was the 1st/6th Battalion DLI’s last battle. In June, the surviving soldiers were sent to other units and the battalion was finally disbanded in France on 6 November 1918.