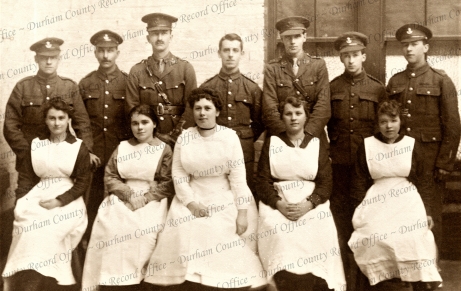 By the end of the war in November 1918, the DLI had grown to 43 battalions, as new Reserve, Service, Territorial, Young Soldier, and other battalions were formed. Of these 43 battalions, 22 served in war zones from the Western Front to the North West Frontier of India.
——————–
The 4th Battalion DLI could trace its origins back to the raising of the Durham Militia in Barnard Castle in 1759 by the Earl of Darlington. In the event of war, the Militiamen would defend the County from foreign invasion, freeing Regular troops for service overseas. In 1853, the old Militia was divided into the North and South Durham Militias, with the South remaining in Barnard Castle. In 1881, the two Militia regiments became part of the Durham Light Infantry, as the 3rd and 4th Battalions DLI, and both served in South Africa in the Boer War. Further changes in 1908, however, limited the role of the old Militia battalions to little more than Reserve units, with the 3rd (Special Reserve) based at the DLI’s Depot at Fenham and the 4th (Extra Reserve) at Barnard Castle.

When the First World War began, the 4th Battalion (then only 458 strong) was mobilised and left Barnard Castle for the Tyne Defences at Wallsend and along the north bank of the Tyne. Later the battalion moved to Killingworth and then Forest Hall, before moving in September 1915 south of the river to Seaham Harbour, where it remained until the end of the war.

The North East’s coastal defences were not tested by any raiding parties of German soldiers or marines, but Zeppelin airships dropped bombs and the German Navy shelled coastal towns. On 11 July 1916, 4 DLI’s camp at Seaham was shelled by a German U-Boat.

Though an important part of the North East’s coastal defences, the 4th Battalion’s main role was to train recruits for active service overseas. Men, recovering from ill-health or from wounds received on the Western Front, were also sent to the battalion as part of their re-training.

When the First World War ended, both the 3rd and 4th Battalions DLI were stood down. Some of the old Militia officers had hopes that the battalions would be revived but they were to be disappointed. In April 1953, without ceremony and largely forgotten, the old Durham Militia battalions were finally scrapped.