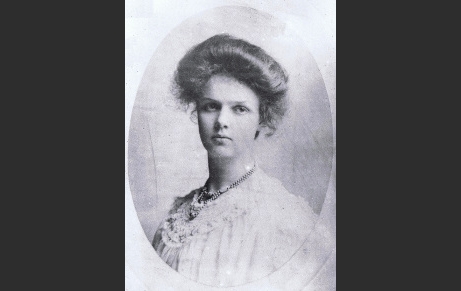 Constance ‘Connie’ Kirkup was born to Philip and Mary Ann Kirkup in 1889, in Cornsay, County Durham, the second of three children. She had two brothers, Ernest, born in 1887, and Philip, born in 1894. By the time of the 1901 census, the family was living at Leafield House, Birtley. Her father, and later her two brothers, were mining engineers and colliery managers.

Before the outbreak of war Connie’s younger brother Philip had joined the local territorial force, the 8th Battalion Durham Light Infantry (DLI), as a junior officer. This was how she got to know Elliot Angus Leybourne, another young officer in 8 DLI and Philip’s close friend.

Angus Leybourne had only been on active service for a few days when he was captured at the Second Battle of Ypres in April 1915. Connie corresponded with him throughout the time that he was a prisoner of war and their friendship developed into a wartime romance. Fortunately, their letters have survived so we have a first hand record of Angus’s experiences in captivity and Connie’s war service on the home front.

An article in the Chester le Street Chronicle on 5 May 1916 records the work of the Birtley War Emergency Committee that was formed early in the war:

‘Now the possibility of air-raid risks to life and limb in this neighbourhood are especially imminent, and it is necessary to be prepared for any emergency, the need for some hospital provision has forcibly presented itself. An Emergency Hospital was formed, replete with all the necessary organisation under the direction of Miss Kirkup, and voluntarily staffed by members of the Birtley and District Nursing Division.’

Connie, writing to Angus on 13 December 1915, says she has visited Elswick Works, the munitions factory in Newcastle upon Tyne, to look at the ambulance room. ‘We are probably going to be needed in the new works here [at Birtley munitions factory] to staff an ambulance room and temporary hospital, but more of that if it comes off.’

In a letter dated 19 January 1916 Connie says her voluntary work at the Royal Infirmary in Newcastle upon Tyne has had to stop as she had been called for service at the munitions works at Birtley on 12 January 1916, and was spending most of her time ‘superintending the fitting up and cleaning of the hospital hut where we are to work until the end of the war or until they sack us.’

By 7 February 1916 she could report, ‘We are kept very busy at the hospital that I told you I was going to work at. I am now installed there as Matron, Matron mark you!!! …there is a serious side to the work, we had a fatal accident the other day. A Belgian, internally injured by a crush, he died about 10 minutes after he was brought to our hut.’ She also tells Angus, ‘It is rather fun making out what the Belgians say, and worse trying to say something to them.’

Connie continued to send news of home, the 8th Battalion, her horse riding exploits and continuing work at the hospital hut throughout the spring. At the end of May 1916, Angus was transferred from Germany to Switzerland where he was interned at Rossiniere, near Chateau d’Oex. It is clear that the affection between Connie and Angus was growing. At the end of July 1916, Angus’ mother and sister travelled out to Switzerland to visit, and he suggested that Connie try to come with them.

Unfortunately, the authorities did not allow Connie to travel to Switzerland as a friend of the family, Angus’ original intention. So on 4 September 1916 he wrote to Connie:

‘I feel that this war alters things somewhat. But what I am really getting at (and you can understand my reluctance in writing as I am not sure exactly of your feelings on the subject) is this. Will you come out to Suisse as my fiancee. I would have much preferred asking you this question in person after having gauged your feelings on the matter, but “faint heart never won fair lady” so I am making the plunge and I can only trust that you do not think me too presumptuous as regards your affections.’

Connie replied on 17 September, ‘talk about a bolt from the blues’. She went on to say, ‘if you are willing to risk it, I am, and you are absolutely the only boy I have ever felt the slightest affection for, oh bother, I can’t put things down on paper.’

The letters Angus wrote to the authorities about obtaining a permit for Connie to travel are preserved in a file in The National Archives. Eventually, in late January 1917, Connie began her journey to Switzerland, keeping a diary and writing to her parents along the way.

Connie stayed in Switzerland until early June 1917. She wrote home about winter sporting activities, excursions to other towns, and the other officers and men in the town. She helped to put on a free variety show for the men interned in Rossiniere. In a letter dated 25 February 1917, she mentioned getting her engagement ring.

On her return to Birtley she resumed her nursing role and by the end of the war she was Commandant of the Birtley Nursing Division.

Angus was repatriated in December 1917. On 16 October 1918 he and Connie were married at St George’s Church, Jesmond, in Newcastle upon Tyne. A detailed report appeared the next day in the Newcastle Journal:

‘The bride, who was given away by her father, wore a gown of fine ivory crepe de chine, the skirt being stitched in an Arabesque design. The bodice and panels were embroidered in georgette over pink mousseline de soie, edged with ostrich feather ruching with a unique girdle of ivory beads and silk cord. The hat was of white manchon, the only trimming being a superb ostrich feather. A bouquet of white carnations and white heather and a gold pendant were the gifts of the bridegroom.’

The couple went on to have two children. Connie was living at The Mount House, Springwell, Gateshead, when she died on 25 January 1950, and Angus died less than two months later.

Connie’s uncle, Austin Kirkup, who was rarely complimentary about his relations, wrote this tribute to her in his later years:

‘The best, the very best of this family was Constance (Conny) the daughter. I can’t make out why she was so kind and good for none of her Kirkup forebears were in any way like her and her mother, sensible in her way, had her failings in temper like the rest of us.

I knew Connie from her birth. She grew up to be a fine well grown lass and when her parents came to Birtley she was at school and afterwards she settled into her home and worked on the usual welfare efforts of the village. Bye and bye she married (after her father had left Birtley) and had children. She was of such a kind nature. I never heard of her saying an unkind word to anyone or about anyone. I loved her better than all my nieces and so indeed did all who knew her. She had two children, both now grown up and I believe they are more like her than like their father. The son did very well in World War II. Connie towards the end had great suffering – cancer – from which I believe her mother died too.

I saw many poor women, not relations, weeping at Connie’s funeral and one of them said to me that if anyone got to heaven it would surely be Connie (Mrs Leybourne).’