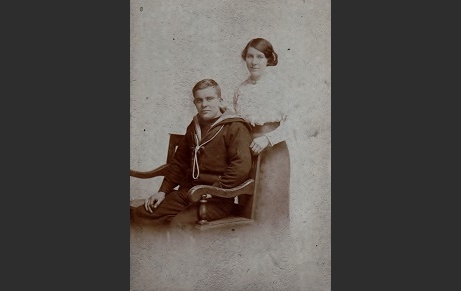 Robert Thoburn Lamb was born in Chester le Street on 31 December 1894. He was the son of George Lamb (1861-1938) a coal miner from Low Fell. His mother was Margaret Jane Selkirk (1860-1897). His parents married in 1892 and had two sons. Robert’s brother Thomas Selkirk Lamb was also born in 1894 thought they were born at opposite ends of the year and were not twins.

After his mother died aged 37 in 1897, Robert’s father married Elizabeth Ann Dixon in Gateshead in 1900. At the time of the 1901 census Robert lived in 22 Urpeth Square, Pelton in a household made up of his paternal grandparents, his father and step-mother and his brother Thomas Selkirk. At the 1911 census he lived at 6 Wilson’s Lane, Low Fell and worked as a coal miner. The household consisted of his father, step-mother, a step-brother Robert Dixon (1889) and his paternal grandfather.

Robert joined the Royal Navy on 5 September 1913, planning to serve for five years in the Navy followed by seven years in the Royal Fleet Reserve. He was rated as a stoker 2nd class and given the service number SS114708. He spent his first five months training at HMS Victory II followed by a posting to HMS Grafton an Edgar-class cruiser. Whilst on board Grafton Robert was given ten days detention for insolent and obscene language.

On 2 August 1914, with the outbreak of war, Robert was assigned to the crew of the battlecruiser HMS Invincible. After exactly one year’s service Robert was promoted to stoker first class on 5 September 1914. While serving on Invincible he saw action at the Battle of Heligoland Bight and the Battle of the Falklands. In late 1915, Robert married Mary O’Connell in Gateshead. From 19 January 1916, Robert spent five days in the cells though the reason for this detention is not recorded.

Robert was onboard HMS Invincible at the Battle of Jutland on 31 May 1916. At 6.30 PM two German ships fired three salvoes each at Invincible and sank her in 90 seconds. One shell struck her ‘Q’ turret, detonating the midships magazines, which blew the ship in half and possibly ignited other magazines. There were only six survivors picked up from HMS Invincible with 1,026 officers and men killed. Robert lost his life in the sinking and his body was not recovered for burial. He is honoured on the Portsmouth Naval Memorial and remembered locally on a Plaque 1914-18, Wesleyan Methodist Church, Low Fell.

Robert never got to see his son, also named Robert Thoburn Lamb, who served in the Durham Light Infantry in World War Two and was at Dunkirk. Family sources indicate that his wife Mary married again and went on to have seven more children. She received a letter of comfort from Ellen Hood of East Sheen Lodge, Sheen, Surrey (wife of the Hon H L A Hood RN commanding the 3rd Battle Cruiser Squadron) in which she writes of the battle in which their menfolk died.

Robert Thoburn Lamb was awarded the Star, the Victory Medal and the British War Medal for his service in World War One.

Thank you very much for your comments. I will make sure to pass this on to the volunteer who has been working on researching men from County Durham who served in the Navy.