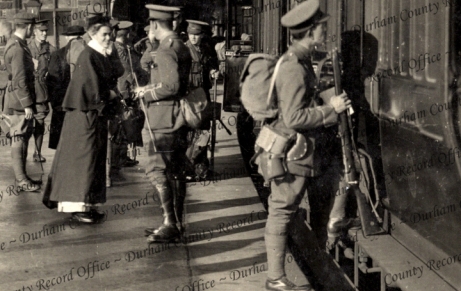 By the end of the war in November 1918, the DLI had grown to 43 battalions, as new Reserve, Service, Territorial, Young Soldier, and other battalions were formed. Of these 43 battalions, 22 served in war zones from the Western Front to the North West Frontier of India.
——————–
The 17th Battalion DLI was formed in October 1914, as part of Kitchener’s New Army, with volunteers from the 4th Battalion DLI, after this reserve battalion had been moved from Barnard Castle to strengthen the North East’s coastal defences.

Then in November 1914, more recruits arrived in Barnard Castle from the DLI’s Depot in Newcastle and moved into 4 DLI’s old camp at Deerbolt, where today there is a Young Offenders Institution. There the new battalion began its training under the command of Colonel Gordon Caulfield DSO, a 52 year old ex-Indian Army officer, who had retired in 1913 and who had been ‘dug-out’ when the war began and experienced officers were desperately needed. Training, however, did not fully occupy the recruits and, with their camp so close to Barnard Castle, off-duty soldiers soon became regular visitors to the town, enthusiastically supporting concerts and sports, attending the local churches, and meeting the local girls.

In June 1915, the 10th (Reserve) Battalion Leicestershire Regiment arrived at Deerbolt to continue their training, and, a few weeks later, on 26 July, the first draft of trained 17 DLI soldiers left Deerbolt for active service overseas with other battalions. Other drafts followed until, on 24 September – as reported in The Teesdale Mercury on 29 September 1915 – the remainder of the 17th Battalion marched with their band playing from Deerbolt to the railway station through a “seething crowd” of cheering townsfolk, as “lasses threw kisses to their ‘boys’”. At the station, each soldier was presented with a wallet and sandwiches for the journey by the town’s War Emergency Committee.

The battalion was not, however, off to France, but rather to Rugeley Camp on Cannock Chase in Staffordshire. There it remained as a training battalion regularly supplying drafts of soldiers for service overseas.