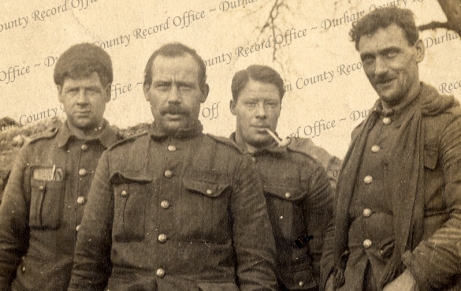 Before the First World War began in August 1914, the Durham Light Infantry, County Durham’s own infantry regiment, was made up of nine battalions each of about 1,000 men. There were two Regular battalions of full-time professional soldiers, many of whom came from outside the North East of England; two Reserve battalions of part-time volunteers and ex-Regular soldiers; and five Territorial Force battalions of part-time volunteers centred on key County towns. There was also the DLI’s Depot or headquarters shared with the Northumberland Fusiliers at Fenham Barracks in Newcastle upon Tyne.

By the end of the war in November 1918, the DLI had grown to 43 battalions, as new Reserve, Service, Territorial, Young Soldier, and other battalions were formed. Of these 43 battalions, 22 served in war zones from the Western Front to the North West Frontier of India.
——————–
The 2nd Battalion DLI was a Regular battalion and in August 1914 was based in Whittington Barracks in Lichfield, as part of the 18th Brigade of the 6th Division – the last of the British Army’s Regular infantry divisions. On 4 August 1914, the telegram ordering mobilisation arrived at the DLI’s Depot in Newcastle. Within days, the first reservists, including veterans of the Boer War, had been given new uniforms and equipment and were leaving South Shields for Lichfield to bring 2 DLI up to its fighting strength of 1,000 men.

After first moving to Scotland and then to Cambridge, as the 6th Division prepared for war, the 2nd Battalion DLI, under the command of Lieutenant Colonel Bernard McMahon, sailed from Southampton for France. On 20 September 1914, this Regular battalion was the first DLI battalion to see action in the First World War, losing 41 dead and almost 100 wounded at Troyon on the River Aisne. These were the first DLI casualties of the war.

On the Aisne, at Armentieres, in the Ypres Salient, and especially at Hooge on 8-9 August 1915, the 2nd Battalion suffered the loss of over 50 officers and 1500 soldiers killed, wounded, or missing. By September 1915, there were few men still serving, who had landed in France twelve months before.

After a second miserable winter spent at Ypres, the 2nd Battalion moved south in late July 1916 to join the fighting on the Somme. Then on 20 November 1917, after months of trench warfare, 2 DLI, as part of the 6th Division, joined the British tank advance at Cambrai, taking prisoners and capturing German guns. A German counter-attack, however, forced the Durhams back with heavy losses.

On 21 March 1918, after a shattering bombardment of gas, high explosive, and shrapnel shells, the German Army attacked on the Somme front. The 2nd Battalion DLI was the only DLI battalion in the front line that day and within 36 hours, the battalion had been overwhelmed with only 60 men escaping death, wounding, or capture.

Rebuilt after the March losses, 2 DLI was again involved in hard fighting in September and October 1918, as the German Army was finally forced back by the Allied armies. On 11 November, when the Armistice ending the First World War came into effect, the battalion was resting at Busigny. A few days later the battalion joined the 6th Division’s march to the Rhine as part of the Army of Occupation of defeated Germany. The 2nd Battalion returned to Britain in April 1919, when most of its soldiers were demobilised. A new 2nd Battalion DLI was then formed at Catterick before it was sent overseas in October 1920.

Photograph of Band and Bugles taken at Colchester

I have an odd story.
A relative of mine was in the 2nd battalion DLI around 1912 and ended up joining the MGC 1st Armoured Brigade in September 1918. But we have no records of what he did between 1912-1918.

He only received the British war medal, not the victory.