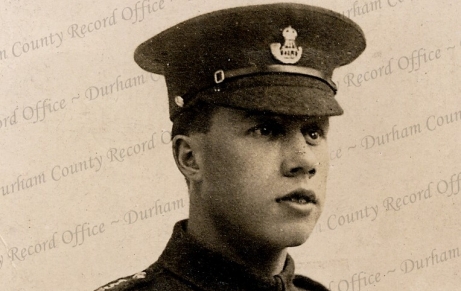 By the end of the war in November 1918, the DLI had grown to 43 battalions, as new Reserve, Service, Territorial, Young Soldier, and other battalions were formed. Of these 43 battalions, 22 served in war zones from the Western Front to the North West Frontier of India.
——————–
The 5th Battalion DLI, formed in 1908 from the old 1st Volunteer Battalion DLI, was a Territorial Force battalion with headquarters in Stockton, and eight companies in drill halls in Darlington, Castle Eden, and Stockton. On 3 August 1914, 5 DLI was on annual camp in North Wales with the rest of the Northumbrian Division, when the order came to return to Stockton and prepare for war. Over the next nine months, the battalion’s part-time volunteer soldiers, formed into four companies, were trained at Ravensworth and Gateshead for full-time active service overseas.

On 18 April 1915, the 1st/5th Battalion DLI landed at Boulogne under the command of Lieutenant Colonel Gilbert Spence and within days was fighting in the Second Battle of Ypres. At St Julien on 26 April, the Territorials battalion suffered heavy casualties and again on Frezenberg Ridge in May.

As part of the 150th Brigade of the 50th (Northumbrian) Division, the 1st/5th Battalion DLI served, until August 1916, in the trenches of the Ypres Salient, Armentieres, and Kemmel. Moved south to join the Battle of the Somme in September 1916, the battalion again suffered heavily in attacks on Prue Trench north of High Wood.

During 1917, the 1st/5th Battalion fought at Arras in April and in October and November in the Third Battle of Ypres. Another winter was then spent in the Salient’s mud-filled trenches.

On 21 March 1918, after a shattering bombardment of gas, high explosive, and shrapnel shells, the German Army attacked on the Somme front. Recently moved to the 151st Brigade, the 1st/5th Battalion was thrown into the fighting in a desperate bid to halt the German advance, but was driven back with heavy casualties.

Two months later, on 27 May, the 1st/5th Battalion, and the rest of the weakened brigade, was destroyed in fighting on the River Aisne. In June, the surviving soldiers were sent to other battalions and the 1st/5th Battalion DLI ceased to exist as a fighting unit. The battalion was finally disbanded in France on 9 November 1918.

Photograph of the manoeuvres of 5th Durham Light Infantry, 1910