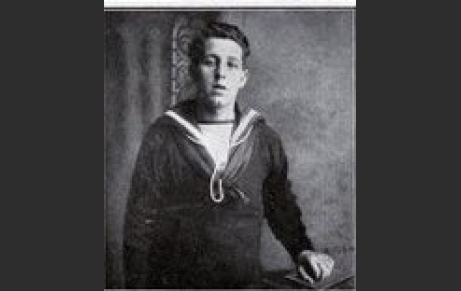 Photograph of James Loveless With many thanks to Jean Kimber

Photograph of James Loveless With many thanks to Jean Kimber

Photograph of James Loveless with his sister, Lena With many thanks to Jean Kimber

James Loveless was born in Station Town on 7 August 1895. His father was William Loveless (1857-1934), originally from Tolpuddle, Dorset who was working as a coal miner. His mother was Mary Loveless nee Morland (1861-1932), who was born in Aycliffe. His parents married in 1886 in Shildon and they had a total of seven children of whom three died in infancy.

At the time of the 1901 census James lived in 8 back Mainsforth Row, Chilton, Ferryhill with his parents, two sisters and one brother. At the 1911 census he was the only child still living with his parents who were now at 19 Robson Street, Wheatley Hill, Thornley. James was working as a pony driver in a coal mine at this time.

James was Stoker 5900(S) in the Royal Naval Reserve and served onboard HMS Warspite during the Battle of Jutland on 31 May 1916. Warspite was a Queen Elizabeth-class battleship. During the battle her steering was damaged which meant for a time she was only able to travel in a circle which made her a tempting target. She was holed 150 times with 14 crew killed and 16 wounded. James died from shrapnel wounds received in the action.

Because she was extensively damaged, HMS Warspite was ordered back to Rosyth, Scotland. James is buried in the Dalmeny Parish Cemetery, South Queensferry, Linlithgowshire. He is also remembered on a statue 1914-18 in Ferryhill.

James Loveless was awarded the Star, Victory Medal and British War Medal for his service in World War One.