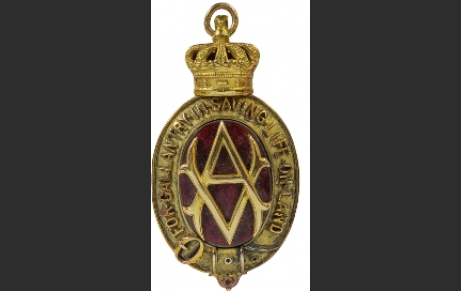 Lance Corporal George Alderson was 31 years old and in charge of the C Company bombers of the 10th Battalion Durham Light Infantry when he responded to an accident with great bravery and presence of mind.

This is how the 10th Battalion war diary describes the events of 14 October 1915:

‘A most unfortunate accident occurred on return of Bombers to Rest Area behind Poperinghe. The Bomb Sergeant was unpacking & storing for the night the bombs in the Farm House kitchen assisted by L/C Scott & L/C Alderson. A bomb dropped out of its compartment in one of the carriers & fell on the floor. Finding that the fuse had ignited L/C Alderson picked up the bomb & rushed to the window to throw it out. Owing to the presence of a large number of men outside, he did not do so but carried it towards the door intending to take it out at the back of the house. The bomb exploded in the door of the room. Casualties Sergt Beckham, L/C Scott, L/C Alderson wounded.

L/C Alderson has since succumbed to his wounds.

A recommendation is being made G.O.C. 14th Division for the Albert Medal to be given for the action of this N.C.O. The bomb was a Newton Pippin & did a great deal of damage.’

Statement of the act of gallantry for which Lance Corporal George Alderson was awarded the Albert Medal of the First Class.
(Extracted from the London Gazette, dated the 19th May 1916)

On the evening of the 14th October, 1915, Alderson, with two other non-commissioned officers, was moving some bombs into a room in a farmhouse where they were to be stored. While the bombs were being stacked, one of them fell to the floor and the percussion cap was fired. Alderson, knowing that the bomb would explode in four seconds, and that to throw it out of the window would endanger the men who were outside, picked it up and tried to reach the door. Before he could get out of the door the bomb exploded, blowing off his hand and inflicting other serious wounds, from which he shortly died.

This act was the more meritorious as Alderson was fully aware of the deadly nature of the bomb and the danger to himself that his act involved.

Where to find more about this person:

Letters concerning the death of George Alderson of Dunston in 1915