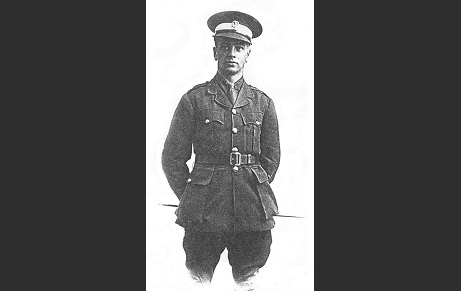 Photograph of Oswald Pearson Arkless With many thanks to Jonathan Arkless, from his family collection

Photograph of Oswald Pearson Arkless With many thanks to Jonathan Arkless, from his family collection

Spennymoor man: from professional singer to Captain in the Canadian Army awarded of the Military Cross

Oswald Pearson Arkless was born on 23 October 1889 in Spennymoor and baptised a month later. He was the youngest child of hairdresser John Arkless and his Yorkshire born wife Mary Annie Reynolds. Their two oldest children were born in Page Bank and the younger three whilst living in South Street, Spennymoor. Two children died at birth.

By 1901, the family had moved to North Street, Spennymoor, and Mary, the oldest daughter was now a ladies’ hairdresser, perhaps working in her father’s salon in the town. The 1911 census lists Oswald as a professional singer and his father and brother William as master hairdressers. In 1912 Oswald, listed as a gentleman, sailed for Bombay on board the SS Arabistan. He returned to England and exactly one year later on 13 October 1913 he sailed from Glasgow to Quebec on the SS Praetorian. He stated his intention for travelling was to visit friends in Edmonton and he gave his occupation as clerk.

On 22 September 1914, Oswald became one of the more than 32,000 men who passed through Valcartier, Quebec when he enlisted there. He became Private 18524 in 101st Regiment (Edmonton Fusiliers). Listing his occupation as civil servant and giving his sister Mary in London as his next of kin his written answer to the question “Do you understand the terms and conditions of your engagement” was “Yes. Fully!”

Sailing for England on board the SS Zealand, Oswald was promoted to Lance Corporal and based at St Martin’s Plain, Folkestone, Kent. Within a year had become firstly a Sergeant and then Company Sergeant Major for the 9th Battalion. By January 1916 he was a Lieutenant and was posted to France with the 49th Battalion. In May 1916 he was back in England at the Shorncliffe Military Hospital with phemosis, which turned out to be caused by syphilis, for which he was treated at Cherry Hinton Hospital in Cambridge. Discharged from hospital in August 1916 he returned to his unit in France to join them at the battle for Courcelette, and then on to Arras, Vimy, Ypres and Passchendaele.

It was during the Battle for Cambrai that Oswald Arkless, according to the Military Honours Citation Card, “took command of his company in an attack when his company commander became a casualty, and displayed qualities of leadership of a very high order. Though suffering very high casualties, he led the remainder of his company forward, established an advanced position under heavy sniping and machine gun fire and held it for two days until relieved”. For this action he was awarded the Military Cross for conspicuous gallantry and devotion to duty. Oswald was then promoted to acting Captain in place of his wounded company commander.

Remaining in England after leave in August 1918, Oswald was appointed full Captain as an instructor at the Canadian Training School, Alberta Regimental Depot, at Bexhill, East Sussex. He returned to the 49th Battalion in France in October 1918. January 1919 saw him on special rest leave in Paris for ten days, and then two weeks leave in England, where he remained until his retirement from active service on 13 May 1919.

Staying in Stoke Newington, London with his sister Mary, in 1925 Oswald married Beatrice Parkinson in Islington and they set up home at Carleton Road, Islington. Over the years they moved within London to Haringey, then Shoreditch, Twickenham, Isleworth and Acton where Beatrice died in 1950.

Oswald Pearson Arkless died on 31 March 1954 in the West Middlesex Hospital leaving just over £188 to a friend.