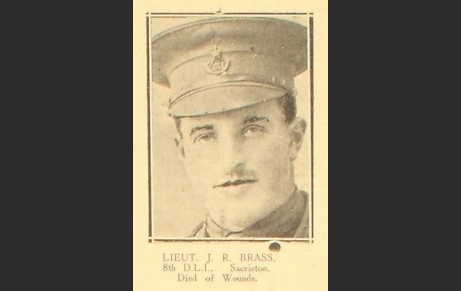 From Sacriston, served with 8th Battalion DLI, killed in action 1915

Born in 1890, James Robson Brass was the son of colliery manager Thomas Francis Brass of Charlaw House, Sacriston. After leaving Durham Johnston School, James trained as a mining engineer and was assistant manager of Charlaw and Sacriston Colliery, when the First World War began.

Commissioned in June 1913, Lieutenant Brass went with the 1st/8th Battalion DLI to France on 19 April 1915. Within days, the raw Territorial battalion was fighting in the Second Battle of Ypres. During the battalion’s stubborn defence of Boetleer’s Farm, James Brass was mortally wounded.

On 14 May 1915, the Chester le Street Chronicle published a letter that had been sent to James’ father describing his wounding and death.

A DURHAM OFFICER’S DEATH.
County Councillor Brass, JP, of Charlaw House, Sacriston, has received from an officer of the 8th Durhams a letter giving particulars of the death of his son, Lieut. J.R. Brass. The officer writes:-
‘It may be some consolation to you to know how gallantly your boy behaved under fire. All through the 25th of April, under very trying circumstances, he was as cool and as steady as anything, and showed a very fine example to those near him. He almost seemed to be enjoying himself. On the morning of the 26th, when we had to retire, he was assisting me in organising some men, and his services were of the greatest value. He was so quick to see what one wanted, and so thorough and self-sacrificing in carrying out orders. He was hit in the abdomen about 7 a.m. on the 26th. He was immediately attended to, and a dressing applied. I am afraid he suffered a bit at first, but he rapidly became unconscious. He was carried back, and would soon receive medical attention. Everything possible was done for him.’

After the war, James’s parents asked for their son’s medals to be sent to them.