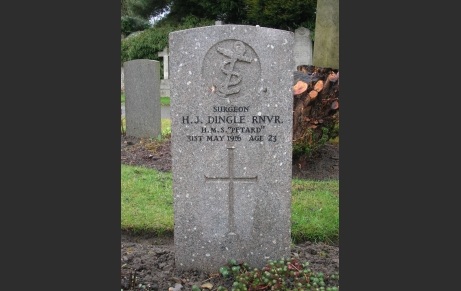 Photograph of Hugh John Dingle's gravestone with many thanks to David

Hugh John Dingle was born in Silksworth in 1893. His father was the Reverend Arthur Trehane Dingle and his mother was Beatrice Dingle nee Robson. At the time of the 1901 census they lived in the Vicarage at Silksworth along with brother Arthur James and sister Mary Caroline. By the 1911 census the family was complete with another sister, Beatrice Margaret, and living at Egglescliffe Rectory. At the census date, Hugh was a boarder at Durham School.

While at Durham School Hugh is reported to have distinguished himself at the game of rugby union as a three-quarter. On completion of his schooling Hugh attended Newcastle upon Tyne College of Medicine, in connection with the University of Durham, to study to be a doctor. He continued to play rugby and acted as captain of the Durham University XV. He also played for Durham County and took part in the final of the county championship against Midland Counties at Leicester in 1914.

At the outbreak of war in August 1914, as the Royal Navy fleet grew in size, there was a shortage of medical officers (known as surgeons in the navy). This shortage was tackled by recruiting third and fourth year medical students into the Royal Naval Volunteer Reserve (RNVR). These recruits took a break from their studies and were appointed as Surgeon Probationers to provide medical and first aid cover for the crews of smaller ships such as destroyers and sloops.

Hugh satisfied the entrance criteria of being of good character and having passed the second medical examination in anatomy and physiology at his medical school. He was appointed as a Surgeon Probationer in the RNVR on 14 August 1914 very soon after war had been declared. His initial posting was to HMS Comet, an Acorn-class destroyer in the Royal Navy.

By May 1916 Hugh was serving in the North Sea on HMS Petard, an Admiralty M-class destroyer that was launched on 24 March 1916. It was on this ship that Hugh took part in the Battle of Jutland on 31 May 1916 when his ship was one of the first destroyers into action. Having made its initial attack it was returning to its position in the fleet when it was hit at least six times. One of the shells struck aft and it is reported that it killed the surgeon probationer just at the moment his services were most required.

Hugh was buried in Dalmeny and Queensferry Cemetery, Midlothian, Scotland on his ship’s return and lies there with a further eight members of crew from HMS Petard. He is widely remembered throughout Durham on a number of memorials related to his education, his sporting prowess and his father’s churches.

Hugh was the second son in his family to fall in the First World War. His brother Arthur James “Mud” Dingle, a second lieutenant in the 6th Battalion East Yorkshire Regiment, was lost at Gallipoli on 21 August 1915.

Silksworth and Tunstall in the Great War website:
http://www.tunsilk.co.uk/page84.html

The Battle of Jutland
Next