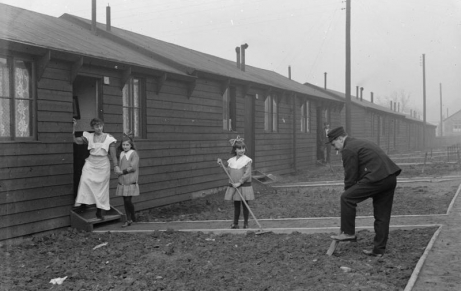 A soldier and his family in their garden in 1918 at Birtley-Elisabethville, Q 27744 George P Lewis (photographer), published under Imperial War Museum Non-Commercial Licence

Colony of the "Birtley Belgians"

Less than a year after the outbreak of the First World War, an unprepared British military was facing a munitions shortfall. As more factories were urgently needed to provide armaments, in July 1915 an agreement was made between Sir W.G. Armstrong, Whitworth & Co. Ltd. and the British government to build two manufacturing plants at Birtley – one to produce shells, the other for cartridge cases. At that time, nearly all of the British able-bodied workers were already either fighting the enemy or engaged in essential industries. So, the government contacted their Belgian counterparts, in exile in France, for assistance because prior to the war, Belgium had been regarded as the foremost European country for the manufacture of armaments. The result was an extraordinary, but effective arrangement being instigated in February 1916: Belgian bureaucrats would manage the two factories and recruit a skilled workforce, provided that Britain paid all expenses and supplied the materials.

The labour force chosen for these factories was made up of wounded and disabled Belgian servicemen, experienced tradesmen withdrawn from the army and skilled civilian refugees who had already fled to Britain. They were provided with paid work in the munitions factories, homes for their families, and promises that they would be repatriated when the war was over. As a result, an unique community (named Elisabethville after the Queen of the Belgians) gradually came into being to house more than 3000 Belgian workers and their families. The first 150 recruits who had the task of erecting the homes and building the factories had to be temporarily billeted about a mile away in Birtley Hall and its grounds until the township construction was sufficiently underway.

For over two years during the First World War, a self-contained community who spoke only Flemish or French, lived and worked in its utilitarian township built on fields on the north-west outskirts of Birtley, beside a main railway line. The township was laid out in a grid pattern on model lines. Living accommodation was of a practical nature, in well-built wooden housing blocks, later affectionately known as the ‘Huts’. Each had running water and a flush toilet. There were steam-heated barracks style hostels for single men and two or three bedroom cottages for families. Each cottage had gardens at the front and back where vegetables and flowers could be grown.

The Belgians adapted to their new surroundings quickly and were recognised as a highly efficient workforce although interactions with their British counterparts were often strained and discordant because financial assistance and supplies of materials were very intermittent.

The self-contained Belgian township had a Roman Catholic Church, primary and secondary schools, a 100-bed hospital, a cinema/recreation hall, two kitchen/dining halls, laundries and bathhouses. There were shops such as a butcher, grocer, dressmaker, draper, shoemaker, hairdresser, a covered market with hardware supplies, and a photographer (whose meticulous work meant that so many photographs of Elisabethville have survived). The township also had licensed premises, a British post office, a pig and poultry farm, outdoor leisure facilities and a Roman Catholic cemetery.

Normal family life flourished; children were born in Elisabethville and youngsters were educated in the schools that provided for 600 children, and later had to be enlarged. Girls and infants were taught by refugee nuns and the boys by army schoolteachers. Pupils were educated in the usual academic subjects, which included both English language and French or Flemish.

The men worked 12-hour shifts in the factories, with only two half-hour breaks. Kitchen staff were capable of preparing meals and feeding 1000 diners in the main restaurant at a single sitting.

Frequently, there were serious accidents in the factories but every compensation payment had to be fought for. It was rare that a family received more than £200 and, disgracefully, in 1918, after the war was over many claimants were offered little other than a priority travel warrant for their family to return to Belgium.

The hospital wards were usually full, the army doctors and nuns being kept busy tending to injured workmen, women giving birth, and sick children, although no epidemics were reported.

Security was absolutely essential to the war effort, so no-one was allowed in or out of the township without a special pass. It was unique: a sovereign Belgian enclave on British soil; and to maintain secrecy its existence was deliberately omitted from most maps.

Elisabethville was administered by the Belgian Government on strict military lines. Workmen were treated firstly as soldiers and secondly as munitions workers, so they had to wear their military uniforms while working their shifts, no matter what jobs they had. A General Manager was appointed to control the factory and its workers with a Belgian officer being responsible for law and order in the township with a force of armed gendarmes to assist. There was a police station and even a prison. The township was surrounded by high iron railings, and a British policeman was on duty outside the main gate.

Working conditions in the factories often caused unrest, nor was it peaceful in the whole the community all of the time. On 21st December 1916 there was a near riot over the strict military regime, work problems relating to the inadequate clothing that the men were forced to wear, and accommodation issues. The unrest was restored only after the gendarmes fired shots.

Before commencing work in the National Projectile Factory, each employee was issued with Identification papers which they were ordered to carry at all times. Failure to do so, not just at work, but anywhere within the community, could result in a period of detainment in the prison. Anyone who lost their papers faced a similar fate, and then had to reapply for them.

Applications for passes to enter Elisabethville had to be made several days in advance of their need and some were rejected for giving insufficient notice.

For relaxation, the Belgians enjoyed music, concerts and theatre, ceremonial and religious parades, boy scouting and various sporting activities including football, boxing, fencing and, particularly, boules. Societies were set up within the community including a brass band and an amateur dramatics group.

Not long after moving to Elisabethville, many workers expressed a desire to explore their environment outside the shelter of the village, meet Birtley’s inhabitants, sample British beers, and visit local cinemas and dance halls, but this was discouraged by both the Belgian and British authorities. Day passes were often not easy to obtain, and many of the inhabitants of Birtley were jealous of, and mistrusted, their foreign neighbours who spoke such a strange language. Occasionally, some of the community’s sports teams were allowed out of the township to compete against local opponents, but only with a police presence, as heated arguments and squabbles were common place.

Even though integration was made difficult by the establishment, some long-term friendships were formed, and a small number of ex-servicemen courted and married local girls. Some later settled in the district where they managed to continue working in the munitions factories or obtain employment in local engineering works, collieries and brickyards. A few were able to resume the professional occupations such as accountants and doctors, that they held before the outbreak of war.

Within a year of the First World War ending, the Belgian refugees were repatriated to their home country. Whilst a few individuals chose to remain in Birtley, the great majority of the families were safely home by early 1919.

Almost immediately after the evacuation, Elisabethville’s outer fences were removed and the furnishings from the cottages were auctioned off.

The township was readily taken over by local families who discovered that their own homes in Birtley had much poorer sanitary conditions and were greatly inferior to the quality of the ‘Huts’.

Nearly 100 years on, very little survives of Elisabethville as it was when occupied by the Belgian community during the First World War.
Shamefully, although the Belgian cemetery was entrusted to the care of Saint Joseph’s Parish in Birtley, it was often neglected and allowed to become semi-derelict, vandalised and overgrown. It has recently been tidied up and the desecrated headstones removed. On Armistice Day 2005 a modern memorial in Birtley’s municipal cemetery was dedicated to thirteen soldiers who died in Elisabethville and were buried in the Belgian cemetery.

During the 1930s the local authority, Chester-le-Street Rural District Council, commenced building a large number of family homes to replace the ageing ‘Huts’. The new housing estate retained the generic name of Elisabethville, even though the area continued to be known by Birtley people as the ‘Huts’.

Remarkably, the prefabricated primary school which had a projected lifespan of just 10 years, remained in use for another 50 years until it eventually became too uneconomical to maintain.

A motor engineering business now occupies the two remaining prefabricated commercial premises, which have been Grade II listed for their importance.

There are still several Belgian surnames to be found on the district Electoral register and in telephone directories.

The manufacture of shell casings continued in Birtley until 2010, with a British management and workforce, even though very little modernisation of the plant took place in the intervening decades. Having been re-named ‘the Royal Ordnance Factory’, it later became part of the munitions sector of British Aerospace. The Birtley BAe factory was subsequently replaced by a new purpose-built factory in nearby Washington, and the entire workforce moved there in 2011.

The extensive Birtley munitions premises have now been demolished, with the intention of being replaced by a private housing development.

Although Birtley may be close to losing almost the last of the fabric of Elisabethville forever contact, history, friendship and gratitude to our Belgian counterparts continues, and many treasured memories are finding their way into print and can be seen in photographs.