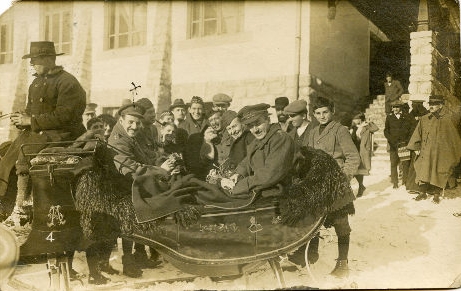 Postcard of the Grand Chalet, Rossiniere, sent by Elliot Angus Leybourne to Connie Kirkup on 2 June 1916. The message on the right reads 'What do you think of this. I am really beginning to think I was born with a golden spoon in my mouth.' Image © the Leybourne family.

8 DLI officer interned in Switzerland as prisoner of war

After only six days on active service with the 8th Battalion Durham Light Infantry (DLI), 25 year old Lieutenant Angus Leybourne was wounded on 25 April 1915 at Boetleers Farm, Belgium, in the 2nd Battle of Ypres.

He was captured and held as a prisoner of war, first in Germany and then in Switzerland, until the end of 1917. His interview by the Committee on the Treatment of British Prisoners of War (link at the bottom of this page) confirms locations and dates:

Wounded in the knee, the International Committee of the Red Cross (ICRC) prisoner of war records show that Angus was in hospital in May, June and September 1915.

At the end of May 1916 Angus Leybourne was one of 27 officers who were amongst the first British prisoners of war to be sent from Germany to neutral Switzerland on the grounds of ill health, under a scheme organised by the ICRC. By 2 June he was at the Hotel Grand Chalet in Rossiniere, one of the oldest chalets in Switzerland, just outside Chateau-d’Oex in the canton of Vaud.

On 4 September 1916, while at Rossiniere, Angus proposed by letter to Constance ‘Connie’ Kirkup. Her brother, Philip Kirkup, was one of Angus’s fellow officers in the 8th Battalion DLI, so Connie and Angus knew each other before the war began. They corresponded throughout his time as a prisoner of war and Connie was able to see him in Switzerland in January 1917 as part of a British Red Cross arranged visit. Angus’s mother and sister had already travelled out to visit him in July 1916.

Angus Leybourne was repatriated in December 1917. He and Connie were married on 16 October 1918 at St George’s Church, Jesmond, Newcastle upon Tyne.

Angus’s family still have the letters he wrote during his captivity. They are currently being transcribed by Durham at War volunteers and you can read all the letters to the end of 1916 by following the link at the bottom of this page.

Where to find more information:

3 cheers for Switzerland! – the prisoners of war interned in Switzerland in 1916
http://lenews.ch/2016/04/06/3-cheers-for-switzerland-the-prisoners-of-war-interned-in-switzerland-in-1916/

Imperial War Museum: film of the arrival of the first internees at Chateau D’Oex in Switzerland (at 1 min 30 secs)
http://film.iwmcollections.org.uk/record/index/5377