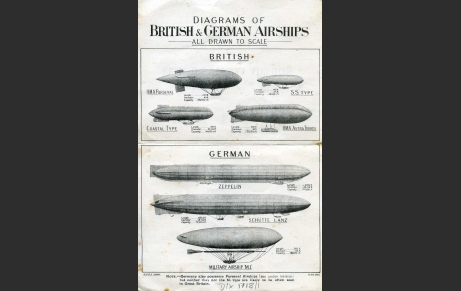 What we would now call bombing was called Aerial Bombardment during the First World War. Between 1916 and 1918, German Zeppelins took part in a series of bombing raids on ports and coastal towns in County Durham. Hartlepool was attacked three times.

On 27 November 1916 Second Lieutenant I. V. Pyott, flying a B.E. 2C aircraft of C flight 36 Squadron based at Seaton Carew aerodrome, attacked Zeppelin L34 over West Hartlepool. Pyott attacked at 9,500 feet and got so close to the burning Zeppelin that his face was scorched by the heat. The Zeppelin crashed into the sea 800 yards beyond the old lighthouse and the crew were killed. Pyott was awarded the Distinguished Service Order for his work that night.

The Zeppelin had crossed the coast to the north of Hartlepool, near Blackhall, and after flying inland was caught by searchlights at Elwick and Hutton Henry. It dropped 13 bombs near Elwick, failing to cause any significant damage. Four bombs were dropped in West Park, a suburb of West Hartlepool, shattering some house windows. Two bombs fell in Ward Jackson Park and a plaque was placed there after the war to commemorate the event. The Zeppelin headed for the coast and was caught by searchlights and fired at by anti-aircraft guns. Twenty-nine bombs were dropped in the Hartley Street, Lowthian Road and Poplar Grove area. Accounts of the number of casualties differ but between two and four people were killed and 34 injured.

The raid caused fear and excitement in Hartlepool in about equal measure because few had ever seen anything like this before. There are photographs of the stricken Zeppelin on the Hartlepool Then and Now website. Just after the raid Frances Mary Carnforth, who was living at 9 Throston Steet, writing to Bessie, presumably a family member, wrote of “such an escape as few had as the Zepp just over our house and such an awful noise with bombs and guns firing and then it burst into flames just when over our street.” All the town turned out to see it “and folks are undressed and half dressed flying up moor to see it go down. I shall never forget the awfulness of it.”
In spite of the raid most of the letter is taken up with her worries for the rest of her family. Her son Wilf, a GPO Messenger Boy before the war, was in France with the Royal Garrison Artillery and she had heard they were half starved she had sent him some things but “it costs so much”.”May’s boy” had visited on the night of the raid but he hadn’t arrived until 10 as his train was delayed by the “Zepps being on the road.” “The poor lad had to go back at 5 tonight it was not worth come for such a distance.” Gunner William Wilfred Cornforth (136613) returned safely to Hartlepool after the war.

Writing to his mother ten days after the raid Pyott, perhaps with some understatement, claimed to have had a very quiet week. For a while, he was a local celebrity visited by Lady Londonderry and friends and was soon to dine at Wynyard where he was to meet Lady Beatty. He had made friends with a wealthy local family at whose home he and his fellow officers usually had a jolly time. He had plans for six days leave in Edinburgh, where he hoped to enjoy himself. He was looking forward to joining another squadron which he had been asked to join. He survived the war and returned to his native South Africa.

In May 2015, a memorial was raised in Seaton Park to remember the bravery of Second Lieutenant Pyott. Ten thousand pounds was awarded to the Friends of Seaton Park by the Heritage Lottery Fund. Children from Holy Trinity Primary School designed dozens of tiles which are displayed with the memorial.

Aerial Bombardment of Hartlepool: The Third Raid
Next