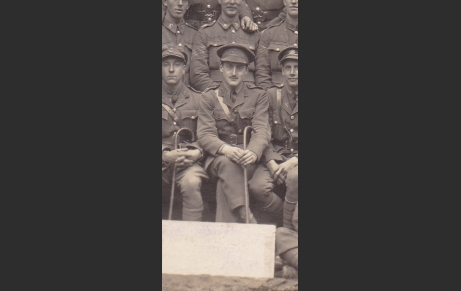 Detail of a larger photograph. Seated in the middle of the "Old Faithful's" is Captain Fillingham. With many thanks to John Sheen, from his personal collection.

George Sidney Fillingham served with the Royal Flying Corps, as a second lieutenant, before he transferred to the Durham Light Infanty (DLI). According the the Army Lists, he was serving with 12th DLI in July 1916 and 11th DLI in November of that year.

He was later posted to 2nd DLI and won the Military Cross at Cambrai in November 1917. In relation to this, the London Gazette published the following on 2 July 1918:

“Lt. (A./Capt.) George Sidney Fillingham, Durh. L.I. For conspicuous gallantry and devotion to duty. During the advance his company came under point-blank fire from a hostile field battery, which was holding up the attack on the flank. Having located and reported the exact position, he was sent forward with two parties to attack the battery. They charged the guns and captured the battery, all the gunners being either killed or taken prisoners. The success of the enterprise was due to his gallant reconnaissance and dashing leadership.”

Promoted to captain with DLI, Fillingham was wounded at Monchies at the start of the German Offensive, 21 March 1918.

Pioneer Battalions in the Great War: Organized and Intelligent Labour