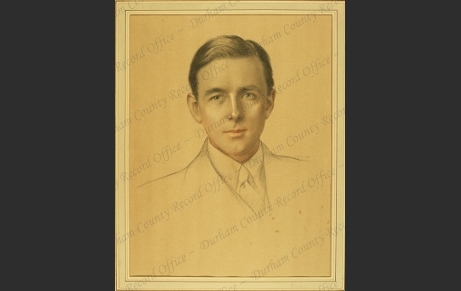 On 4 November 1915 Lieutenant Philip Anthony Brown, 13th Battalion Durham Light Infantry, was wounded whilst engaged in observation in front of the trenches at Armentieres, and was rescued under circumstances of great heroism by Private Kenny, his observer, and by Captain White with a party of men. Private (later Sergeant) Kenny was awarded the VC and Captain White the MC.

Lieutenant Brown died of his wounds before he reached the dressing station.

This portrait of Philip Brown was made in 1918, after his death. It was presented to the Durham Light Infantry regimental collection in November 2015 from a private collection, with no family connection, where it hung on the staircase and was much loved for 40 years. It is now in the care of Durham County Record Office.

Research by the Workers’ Educational Association North East early in 2016 has identified the artist as Charles Prestwich Scott, nephew of C P Scott (1846-1932), the Manchester Guardian editor. Philip Brown’s book on the French Revolution has a line drawing, signed by C P Scott in 1913, as the frontispiece.

The WEA in World War 1 in the North East – Philip Brown and Thomas Kenny VC
https://weainworldwar1.wordpress.com/philip-brown-and-thomas-kenny-vc/


Employment: On leaving Oxford Philip Brown took up literary work, and for some time lectured at the London School of Economics, afterwards becoming lecturer in economics at Durham University, during which time he took a great interest in the education of working men and women and was tutor in the Workers’ Educational Association.

On the staff of Durham University, lecturer, 1912

Author of ‘The Influence of the French Revolution on English History’ (published posthumously).