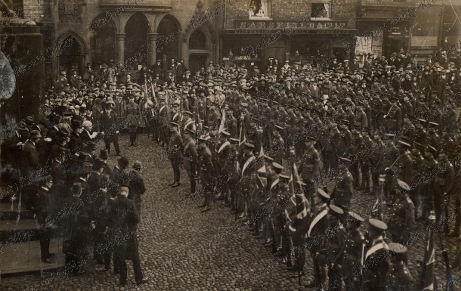 Mayor of Durham addressing soldiers of The Durham Light Infantry during an Armistice Day parade in the Market Place, Durham, 11 November 1920 DRO:D/DLI 2/7/18(55)

Mayor of Durham addressing soldiers of The Durham Light Infantry during an Armistice Day parade in the Market Place, Durham, 11 November 1920 DRO:D/DLI 2/7/18(55)

When the First World War began, just one DLI battalion was sent to France. By 11 November 1918 – Armistice Day – eighteen DLI battalions had fought on the Western Front and in Italy, with four more in action in India, North Russia and the Balkans. During the war, over 90,000 men – both volunteers and conscripts – had served in these battalions. More than 13,000 had been killed or died of wounds or disease, with many thousands more wounded, gassed or taken prisoner.

Most of these men had served in DLI battalions specially raised for service in the war. One of the most famous of these was the 13th Battalion DLI. In November 1915, Private Thomas Kenny from this battalion was awarded the Victoria Cross, the first awarded to the DLI during the war.

When the First World War ended, these war-time battalions were disbanded and the men returned to civilian life. However, rather than let these DLI battalions simply be forgotten, each was to be presented with its own silk King’s Colour – a Union Jack bearing the regiment’s name and the battalion’s number.

In Durham, the second anniversary of the Armistice, Thursday 11 November 1920, was the day chosen for the presentation and then laying-up in Durham Cathedral of twelve of these Colours. In the early afternoon, soldiers from the DLI’s Depot in Newcastle and from the DLI’s five Territorial battalions marched with the Colours from the railway station to the Market Place. There they were welcomed by the Mayor (Councillor Thwaites) who said that the “citizens of Durham were unspeakably proud of the County Regiment”. Amongst the Colours on parade were those of the 13th Battalion. A large crowd filled the Market Place to watch this parade, perhaps Thomas Kenny VC was amongst that crowd.

At the end of this short ceremony, the soldiers marched to Palace Green and then into the Cathedral, with the band of the 9th Battalion DLI playing “Auld Lang Syne”. There Major-General Robb, the Colonel of the Regiment, handed the Colours to the Dean saying, “In the name of the Durham Light Infantry, I present these Colours to the Cathedral of the City of Durham, for ever to be preserved by the Dean and Chapter”.

Today, after almost a hundred years, the old Colours laid-up in November 1920 may still be seen hanging in the DLI Chapel in the Cathedral, as a continuing reminder of the sacrifice of both the County Regiment and the people of Durham during the First World War.