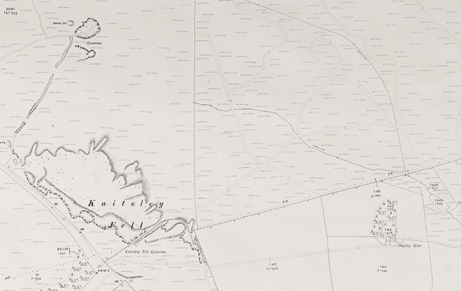 The prisoner of war camp at Harperley was opened in September 1916. Initially, the prisoners were in tents at Low Harperley farm, and then moved to huts at Shipley Moss. This is about a mile from Harperley station. It was also near Knitsley Fell ganister quarry, where the men in the camp worked.

At the time of the first Swiss Red Cross inspection in June 1917, Harperley was under the parent camp of Leigh, Lancashire. In the command of Major A. Rouse (regiment unknown) were 230 prisoners accommodated in 8 dormitories. They also had a dining/recreation hall, a library with 150 volumes and a vegetable and flower garden.

The camp was inspected again in February 1918, by which time it was under Catterick camp, North Yorkshire. The International Committee for the Red Cross (ICRC) prisoner of war records that have been found for some men indicate that they moved to Catterick Camp in February 1918. It seems likely that they did not move, it was just the reassignment of the camp’s administration. Other than this, the second visit reports few changes.

The mental and physical health of the prisoners was considered good and there were few complaints from the men themselves. However, between 7 and 23 November 1918, as the second wave of the Spanish Flu pandemic was spreading around the world, 27 prisoners died of the illness. The ICRC records give the cause of death as influenza and broncho-pneumonia.

The 27 men were buried three at a time in the churchyard of Hamsterley St James.
12 November 1918
Albert Schink
Ernest Sternberg
Felix Wloczyk

More information on these men can be found in the document in supporting items.

In late 1959, the British and German governments agreed a plan to move all the German war dead in the United Kingdom to a new German military cemetery to be created at Cannock Chase where they would be maintained by the Commonwealth War Graves Commission (CWGC). Working in partnership with the Volksbund Deutsche Kriegsgraberfursorge (German War Graves Commission), the arrangements were made. The Hamsterley St James parish records include a copy of the faculty dated 15 November 1961, from the Bishop of Durham to the CWGC agreeing to the disinterment proposals.

It is noted at the bottom of men’s entries in the parish burial register that this was carried out between 18 and 28 June 1962, signed by the vicar and a representative of the Volksbund. The dedication of the German Military Cemetery, containing the graves of nearly 5000 men from the First and Second World Wars, took place on 10 June 1967.

Prisoners in the North: the forgotten deaths at Harperley Camp