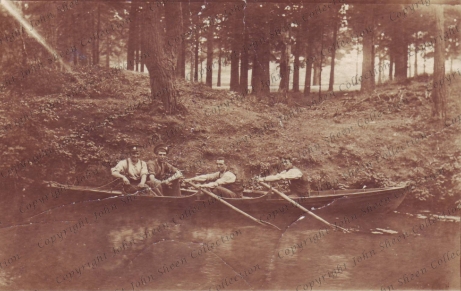 Photograph, Ralph Frater in the centre of the boat with the oar With thanks to John Sheen, from his personal collection, 004

Photograph, Ralph Frater in the centre of the boat with the oar With thanks to John Sheen, from his personal collection, 004

Photograph, Signallers of the 9th Border Regiment Salonika, 12 December 1916 With thanks to John Sheen, from his personal collection, 005

Private Ralph Frater was a coal miner living with his parents before joining the army in Durham in the first week of September 1914.

He was sent to Carlisle to join the Border regiment and was posted to the 9th Battalion where he became a Signaller in Battalion Headquarters. Throughout the war he played for the battalion Football Team.

He landed in France on 7 September 1915 and from there moved with the battalion to the Salonika Front in November.

He was awarded the Victory Medal and British War Medal.

Ralph Frater was also awarded the 1914/15 Star but when it arrived in Sacriston it had 14079 Pte B Frater inscribed on the back of the medal. Ralph was very annoyed, “After four bloody years they couldn’t even get my name right.” The medals and the Sacriston welcome home medal were thrown over the allotments. Ralph’s sister Polly ran after them and picked the medals up but didn’t tell Ralph. When informed of Ralph’s death in 1977, Polly made efforts to return the medals to his grandson John Sheen, but it wasn’t until 2007 when John’s daughter visited Nanaimo that the medals eventually returned to County Durham.