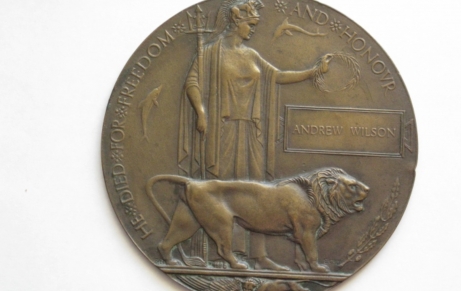 Photograph of Andrew Wilson medal With many thanks to Ian Wilson, from his family collection

Andrew attended a number of schools due to the itinerant work of his shepherd father. His final school was at Cambo Northumberland, where he gained a scholarship to the King Edward’s Grammar School in Morpeth. During his time at King Edward’s, he stayed at lodgings during the week, returning home at weekends and holidays via Scotsgap Junction on the Morpeth to Bellingham railway. In 1912, he obtained excellent examination results and was offered a place as a student teacher at Bede Teacher Training College, Durham City.

The normal student practice in those days was to join the college military unit (the equivalent of the present day Territorial Army. In this case it was the 8th Battalion Durham Light Infantry (DLI) Bede College Company. The Battalion had annual camps and other training activities, which increased in activity as the political situation worsened towards 1914. Andrew successfully gained his teaching qualifications in the summer of 1914, but it was then that his Battalion was called to arms and merged with the 1st Battalion to form the 1st/8th Battalion DLI. Andrew was enrolled in Company B as a Private at 1/- (5p) a day.

On 19th April 1915, he embarked from Folkstone for Ypres by Boulogne and on the 20th travelled via Ostrovhe, Pont des Briques, St Omer and Cassel to St Marie Capelle. On the 23rd, his Company was moved from St Marie Capelle to Riveld, Steenvoode, Paperinghe and Vlamertinghe.

The Company marched into action on April 23rd by way of Vlamertinghe, Potijze, Velorenback, Frezenberry and via a level crossing (the Devil’s Crossing) on the Ypres to Frezenberry railway to the Zonnebeke/St Julien road and to trenches on Boetleer’s Farm. The farm ceased to exist during the war but has been rebuilt under a different name with a similar footprint.

I [Ian Wilson] have described this detailed journey as it can be followed using a map showing minor roads in the Ypres area. I have also a plan of the trench layout at the farm that identifies the trench in which Andrew probably met his death.

Company B, under Major J. R. Ritson, was located in trench 7. Trench 7 was subjected to heavy artillery fire and the company was moved to some buildings on the St Julien/Grafenstafel road. Two platoons of B Company were sent to reinforce A and D Companies, but had to retreat and subsequently B and C Companies came under gas attack. The four companies A, B, C and D retreated to Velorenhoek after being subjected to intense attacks by the Germans over the 25th/26th April. Among the casualties were 19 officers and 574 soldiers of other ranks, including Andrew Wilson, who was killed on 26th April. His body was never recovered and he is remembered on the Menin Gate memorial Panels 36/38. He is also remembered on a family stone in Kirkharle churchyard, on Bede College WW1 memorial (now St Hilda and St Bede College) and in the college chapel.

This indeed was a tragic loss of a young man, the first-born son, who would have undoubtedly been the first of my family to move from a hard working environment to a professional one. Andrew’s mother died when he was a small boy and my grandfather subsequently married my grandmother, who gave Andrew four brothers, three of whom became police officers, including my own father. [Ian Wilson]

This story was originally published in The Commemorative 1914 – 1918 Journal of the Northumberland and Durham family History Society Journal Autumn 2014 Volume 39 Number 3.

Action at Boetleer's Farm
Next