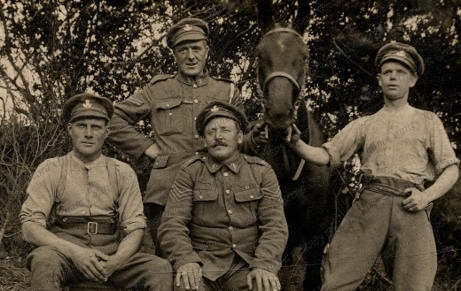 Apart from the First World War, George Thompson spent his whole life in the shadow of Sunderland Minster. He lived in Crow Street, now covered by The Bridges Shopping Centre, and he married a girl from the next street, Carter Street. Like his father and grandfather, he worked at nearby Vaux’s Brewery. As a territorial soldier with the 7th Battalion Durham Light Infantry (DLI) he trained on the Garrison Field, which now lies underneath Gillbridge Avenue Police Station.

George was born at Clanny Street in Sunderland on 28 November 1893. He grew up close to Vaux’s Brewery: his father, Edward, and grandfather had both worked there and he lived at Vaux’s Brewery House for a time. His mother Elizabeth died in April 1899 and his father re-married a year later. George lived with his father, step-mother and younger sister Lilian who was born in January 1896.

In October 1910, shortly before his seventeeth birthday, George joined the Territorial Force. This was a part-time army, the forerunner of today’s T.A. Among his papers there is a photograph of him at the DLI Territorials’ annual training camp at Conway in North Wales in July 1914, only days before war broke out. He was there a week before the battalion was called back home as England had declared war on Germany.

George was ‘picked for a transport driver’. In 1914 motor vehicles were expensive and not suited to travelling over muddy or rutted ground, and so the ‘transport’ was horses and carts. George spent several months training in Gateshead and the grounds of Ravensworth Castle, learning how to ride bare back and with a saddle and how to drive heavy wagons.

After eight months George set off with the 7th Battalion for France in April 1915. The horses and drivers of the transport section left Gateshead station two days ahead of the rest of the battalion to allow time to stop and feed the horses en route. At Southampton the battalion boarded the SS Dunkirk and sailed overnight to Le Havre.

For George Thompson this was the start of almost four years of war service, driving rations and supplies to where they were most needed, often under enemy fire. George described his experiences in a compelling memoir written in 1928. You can read George’s story online by following the link at the bottom of this page.

He had four periods of leave, including 14 days in January 1918 when he came home to marry Ada Isabel Frater. Remarkably, when he left France for the last time in January 1919 he still had one of the horses that travelled out with him in 1915.

Although demobilised at the end of the Great War, George re-enlisted in 7DLI until June 1921 and gained his long service award. On leaving the army George returned to work at Vaux’s Brewery, where he became a fermenting room foreman. He retired in 1959.

George and Ada’s daughter, Gracie Evelyn, was born on 30 November 1926 and christened on 22 December in Bishopwearmouth parish church.

After George’s death Gracie gave her father’s medals and records to the DLI Museum.

His medals are now in the DLI Collection. https://www.dur.ac.uk/library/asc/dlimedals/

His records are now part of the DLI regimental archive at Durham County Record Office
http://www.durhamrecordoffice.org.uk/Pages/AdvancedSearchCatalogueDetail.aspx?SearchType=Param&SearchID=117d0302-500d-4f27-aecf-138901a1f54e&ItemID=680376#ref171154

Employment: Vaux’s Brewery labourer. Employed as a fermenting room foreman from 1936. Retired 1958 or 1959

The Fighting Pioneers. The Story of the 7th Battalion DLI