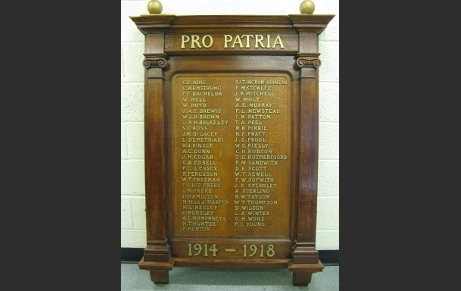 Frederick Hunton was the only Durham county councillor to be killed in the Great War. He was born at Tennant Street, Stockton, on 25 June 1869, the eleventh (and last) child of John Hunton and his wife, Mary Ann. John and Mary Ann Knowles had married in Stockton in early 1853. Although the baptisms of Frederick’s next two older siblings, Mary and Henry, can be located in St. Thomas’ church in March 1866 and February 1868 respectively, neither Frederick nor any of the other children appear to have been baptised in an Anglican church in Stockton or Norton [1].

In April 1871 the family was living at 8 Victoria Terrace, Stockton, and Frederick’s father was recorded as a brick and tile manufacturer with 35 employees (and works in Portrack Lane). The family then consisted of the parents and nine children (Christopher John, born 1854, and a banker’s clerk; Isabella, born 1855; James Anthony, born 1857, William Knowles, born 1858; Louisa, born 1862; Eleanor, born 1863; Mary, born 1866; Henry, born 1868; and the one-year old Frederick) [2]. There were also two female servants.

By April 1881 the family had moved to Greystone House, Carlton, Redmarshall. John now described himself as a JP, alderman [of Stockton borough] and poor law guardian (as well as brick and tile manufacturer); Christopher was still a banker’s clerk, William was now a clerk in a timber business. Louisa, Henry and Frederick was also at home, with two boys shown as scholars (Frederick at King James’ Grammar School, Bishop Auckland), and there was now only one living-in servant.

Frederick’s father died in 1887, but in April 1891 his mother was still living at Greystone with Isabella, Louisa, Eleanor and Mary. William appears to have taken over the brick and tile business and Henry was an organic chemist; and there were now two servants, a cook and housemaid. However, it has not yet been possible to locate Frederick on the 1891 census although he was probably living as a medical student in Newcastle upon Tyne. In the spring of 1891 he was completing the first stage of his qualification as a medical practitioner – he was awarded his bachelor of medicine and bachelor of surgery degrees in September 1891, and was registered with the Medical Council on 8 October. His medical doctorate followed in September 1893, and a second Medical Council registration on 16 October.

By 1895 Frederick was a general practitioner in Norton, living at Harland House, and in early 1898 in Stockton he married 21 year old Maud(e) Mary Laing Young, one of triplet sisters. Probably in 1899 they moved to Sedgefield as the March 1901 census showed them living at High Row, with their two daughters, Gwendolen Mary (born 1899) and the one-month old Winefred/Winifred [3]. Sarah Soulsby, a hospital nurse, was a boarder, and a cook and housemaid completed the household.

Maude died, aged 26, on 8 September 1902 (possibly in childbirth, as a third daughter, Maude Enid/Aenid, was baptised on 23 September 1902) and five years later, in the final months of 1907, Frederick married one of her two remaining sisters, Eleanor Mary Webster Young. Frederick and Eleanor had a daughter, Doreen, in 1910, and in the April 1911 census they were living with all four children at The Whins in North End, Sedgefield, an 18-room house. The resident servants comprised a cook, two housemaids and a nurse. A final child, Arthur F., was born in early 1912.

In April 1910 he stood in a by-election for the County Council Sedgefield division, which had become vacant when the previous county councillor, Simon Tate, was elected as an alderman. He was one of four candidates, and was elected with 566 votes, a majority of 41 over W. Dobson, a draper. In his obituary Dr. Hunton was described as a good sportsman and a regular follower of the South Durham foxhounds, based at Sedgefield, and his hunting interest is revealed in his comments after the election, which was he said was ‘a splendid gallop. He had had a few brushes in his time, but he thought this was the best brush of all’. He stood again at the triennial elections in April 1913 and was re-elected unopposed.

Frederick Hunton volunteered for service in the British Army in 1914, when he was 45, and he was gazetted as a lieutenant in the Royal Army Medical Corps (but attached to units other than medical units) on 5 January 1915, subsequently corrected to 17 December 1914 [4]. His Service Record has been extensively weeded but his application for a commission includes a certificate of good moral character signed by viscount Boyne of Brancepeth Castle. He was initially attached to the Northumberland Hussars Yeomanry, a Territorial Force cavalry unit, and was promoted to captain on 17 June 1915 [5].

It is not clear where Dr. Hunton was based, but on 13 April 1916 he was given six weeks sick leave following a broken leg which he sustained by falling from a horse on a visit to No.1 (or Northumbrian) Northern General Hospital. This was a Territorial Force hospital which was accommodated in Armstrong College (now part of Newcastle University) and the Newcastle Workhouse Infirmary (now Newcastle General Hospital). On 22 June 1916 he was declared fit for duty and rejoined his unit two days later, but the second half of 1916 is a blank as far as his activities are concerned.

The next we know is that he sailed from Marseilles on 20 December 1916 and on 27 December arrived at Alexandria, where he joined the RAMC base depot at Mustapha. On 13 January 1917 he joined the No.15 Military Hospital at Abbassieh, Alexandria (this was a school which had been converted into a hospital at the beginning of the Gallipoli campaign). Less than a month later, on 2 February, he joined the 1/1st East Riding of Yorkshire Yeomanry, but on 19 February he was moved to the Casualty Clearing Station attached to the 53rd (Welsh) Division at Ismailia.

A Casualty Clearing Station was part of the chain of units dealing with wounded men. Men were initially dealt with at a Regimental Aid Post, then passed to an Advanced Dressing Station, then a Main Dressing Station, before they arrived at a Casualty Clearing Station, which would be about 20 kilometres behind the front line, on a railway line, and would normally have seven medical officers. A CCS would be able to treat at least 200 men at any one time and was the nearest to the front line where nurses were based.

The 53rd Division was part of the Egyptian Expeditionary Force which was advancing into Turkish-held Palestine. The Sinai and Palestine campaign of the Great War had begun in January 1915 with a German-led Turkish advance from Palestine into Sinai, part of the British Protectorate of Egypt. Following the failure of the Gallipoli campaign the Egyptian Expeditionary Force was created in 1916 from British and imperial troops, and in three battles Sinai was recaptured and Turkish territory in Palestine was occupied. In February 1917 the Expeditionary Force cavalry advance permitted the extension of a railway to Deir el Belah, 20 kilometres south-west of Gaza City, where an aerodrome and camps were established. The Expeditionary Force was subsequently defeated in two battles in March and April 1917 as it attempted to take Gaza, and a period of stalemate followed before the advance north was resumed in October.

Frederick Hunton was killed in action on 6 May 1917, age 47, as a result of a bombing raid on Deir el Belah, and was buried in Deir el Belah CWGC cemetery in Gaza. This cemetery, which contains 724 Commonwealth war graves, was begun in March 1917.

Frederick Hunton was one of the 743 RAMC officers who died in the Great War, and he is commemorated on the war memorial cross outside St. Edmund’s church, Sedgefield, where a memorial service was held on 19 May 1917. His is also one of the 53 names on the Newcastle University Medical School memorial plaque which was unveiled in 1923 and was originally located in the entrance hall of the Old Medical Building in Framlington Place, Newcastle. (It is now in Room 98 in the Medical School).

Frederick’s will was proved in January 1918 by his wife and his brother, Henry, and he left £13,204. His wife died eleven years later, at Saxonbury, Rotherfield, near Tunbridge Wells in Sussex, on 3 May 1929.

I am honoured to be Frederick Hunton 's grandaughter and very much appreciate this account of my grandfather's life. How I wish he had lived long enough for me to have known him! My husband Will and I visited both Sedgefield and Greystone a few years ago. We were delighted to be invited inside The Whins and Greystone by the owners. We very much enjoyed our visit and conversations with the owners.