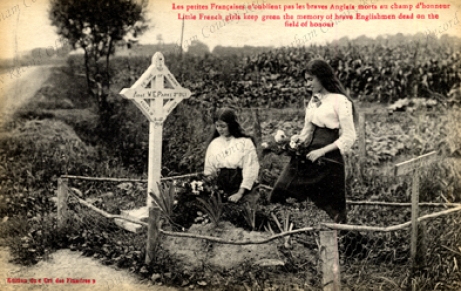 Group photograph of officers of the 2nd Battalion, The Durham Light Infantry, 1914, Parke is third from right on the middle row. Norton is to his left. The next but one along from Norton is Roland Boyes Bradford. D/DLI 2/2/208, Durham County Record Office

Killed after six weeks in France

The story of Walter Parke came to our attention when researching for a schools workshop as part of the Comenius REGIO project in February 2015. Partner schools in Willington, County Durham, and Roisel, in the Somme, are creating online resources to share and develop their understanding of the First World War. When the French students came to Durham the county’s International Officer, Brian Stobie, asked the Record Office to arrange and deliver an activity session for them and their Willington partners. We based part of the session around the ideas of French/English communication and co-operation. While searching through our archive collection we came across the postcard of Parke’s grave being tended by two French girls. This led to the other photographs that can be seen here.

In the picture of the colour party, W E Parke is pictured on the left while Leopold Grantley Norton is on the right of the Colour-Sergeant. In the group photograph, taken 1914, Norton and Parke stand next to each other. Norton was killed exactly a week after Parke.

His brother, John Aubrey Parke, was killed in September 1915 and is buried in Ypres.