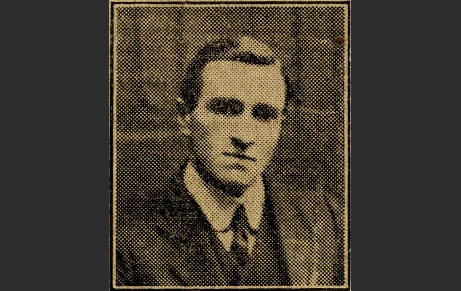 Teacher at West Auckland, who served with the DLI and the Machine Gun Corps

John Barclay was born in Penrith on 5 October 1889, the son of William and Barbara Barclay. In 1891 the family were living at 4 Albert Terrace, Penrith, and John’s father is recorded as a watchmaker. Ten years later the Barclays were still living in Penrith, but had moved to 4 William Street, and John now had two younger brothers – Thomas age 7, and Frederick age 5. He attended the Boys Church of England School and then the Grammar School in Penrith, and followed this with three years as a pupil teacher at his old primary school and one year as an unqualified assistant teacher at Brunswick Street School. He sang in the choir of St. Andrew’s church, the old parish church of the town.

He trained as a teacher at Bede College in Durham from 1909 to 1911, and in the 1911 Census he is recorded as a resident at the College. Following qualification he began teaching at West Auckland Church of England School on 22 August 1911.

A month after joining the staff of the school he was authorised by the head teacher to ‘administer slight corporal punishment’, but apart from a half day’s illness his name does not otherwise appear in the school log book until a reference to his volunteering for active service and joining up on 23 September 1914.

Following the outbreak of war in August 1914 he was given permission to enlist by the County Council Education Committee on 30 September 1914, although he had actually signed-up on 22 September. He joined B Company (the Bede College company) of the 8th Battalion of the Durham Light Infantry, but shortly after the beginning of the war B Company was absorbed into A Company.

The battalion had been mobilised on 4 August 1914 and went to France on 20 April 1915. Within three days of landing the battalion was ordered into the front line to take part in the Second Battle of Ypres, and saw its first action at Gravenstaffel Ridge in the Ypres Salient, where it experienced one of the first large-scale German gas attacks.

While in the army John Barclay kept a diary, the surviving volumes of which cover 31 December 1914 to 31 December 1917, and his obituary in the local Penrith newspaper notes that he took a keen interest in the history of the towns and villages in France and Belgium where he was stationed. He was subsequently moved from A Company of 8 DLI to C Company of the 50th Battalion of the Machine Gun Corps, and was eventually promoted to Orderly Room Sergeant.

John Barclay saw action throughout the remainder of the war, but having survived 3½ years of battle and the horrors of the Western Front, in late 1918, while still in France, he contracted Spanish Influenza, which was sweeping throughout the world. He refused to report sick as he was due for home leave, and he arrived in Penrith on 1 December. However, his health rapidly deteriorated and he died on 14 December (just as his leave expired), age 29. Consequently he is buried in Penrith Cemetery, and although he did not receive a military funeral, his coffin was carried to the grave by six soldiers in uniform. In addition to the County Hall memorial he is also commemorated on the plaque and cross at the College of St Hild and St Bede, the war memorial at West Auckland and the Roll of Honour at West Auckland Methodist Chapel. The West Auckland School log book also records his death.