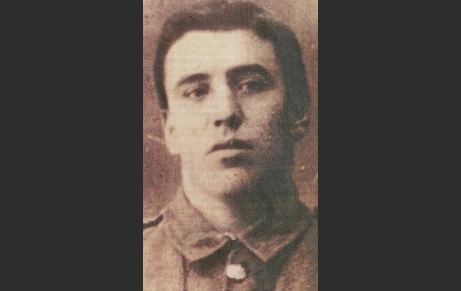 In late 1914, the minimum height for British Army recruits was reduced from 5’ 3” to 5’ and ‘Bantam’ battalions were soon raised across the British coalfields. In County Durham, the 19th (Bantam) Battalion Durham Light Infantry was formed in January 1915.

One of these Durham Bantams was a miner from Crook, Joseph Stones, who had been born at Jobs Hill in 1890, and who was living with his wife, Elizabeth, and young family at Wheatbottom, when he enlisted in West Hartlepool. After training, 19 DLI was sent to France in February 1916 for active service on the Western Front and Private Stones was soon promoted to Corporal and then to Lance Sergeant.

About 2am on 26 November 1916, as the Durham Bantams were holding part of the British front line near Arras, Lieutenant James Munday and Sergeant Stones were attacked by German raiders on the edge of King’s Crater, and Lieutenant Munday was mortally wounded. Sergeant Stones then left his wounded officer and was later stopped behind the front line trenches by military police, who asked him where he was going and what had happened to his rifle. Meanwhile, in the dark and confusion, though the German raiders had not pressed home their attack, other Bantams led by Lance Corporals Peter Goggins and John McDonald abandoned their front line trench. These men were also stopped behind the front line by military police, who found that neither Lance Corporal was carrying a rifle.

On Christmas Eve 1916, Joseph Stones was tried by court martial for “shamefully casting away his arms in the presence of the enemy”, whilst Peter Goggins and John McDonald were tried for leaving their posts without orders from a superior officer. All three were sentenced to death.

An eye-witness account of the executions of Peter Goggins, John McDonald and Joseph Stones, 18 January 1917, Rollencourt, France.
“Three stakes a few yards apart and a ring of sentries around the woodland to keep the curious away. A moto ambulance arrives conveying the doomed men. Manacled and blindfolded they are helped out and tied up to the stakes. Over each man’s heart is placed an envelope. At the sign of command the firing parties, twelve to each, align their rifles on the envelopes. The officer in charge holds his stick aloft and as it falls thirty-six bullets usher the souls of three Kitchener’s men to the great unknown. As a military prisoner I helped clear up the traces of that triple murder. I took the posts down… I helped carry those bodies towards their last resting place; I collected all the blood-soaked straw and burnt it. Acting on police instructions I took all their belongings from the dead men’s tunics (discarded before being shot). A few letters, a pipe, some fags, a photo. I could tell you of the silence of the military police after reading one letter from a little girl to ‘Dear Daddy’, of the chaplain’s confession that braver men he had never met than those three men he prayed with just before the fatal dawn. I could take you to the graves of the murdered.”
From ‘Shootings at Dawn’ by Ernest Thurtle, Daily Herald, 1925.

During the First World War, over 3,000 British soldiers were sentenced to death, though most of these sentences were subsequently commuted to imprisonment, which were then suspended. Seventy of these men were from the DLI. Seven of these DLI soldiers were ‘Shot at Dawn’.

Joseph Stones is buried at St Pol Communal Cemetery Extension, France, in the care of the Commonwealth War Graves Commission.

As Joseph Stones had been executed, no campaign medals were sent to his widow, who was informed in February 1917 that she was not eligible for a widow’s pension.

Where to look for more information about this person.

19/647 Lance Sergeant Joseph William Stones’ Army Service Record has survived and is held at The National Archives. This record may be seen on the Ancestry family history website: http://www.ancestry.com/

Medal(s): As he had been executed, no campaign medals were sent to his widow.