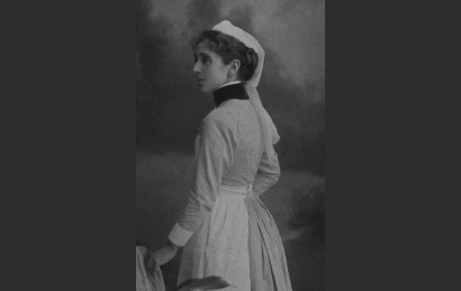 Born at 30 Clyde Terrace, Spennymoor, by 1891 Kate Maxey had moved with her sister to Leeds to lodge with their aunt and uncle, who was a physician. It was there that she trained as a nurse at Leeds General Infirmary, qualifying in 1903.

In 1912 she joined the staff of the Army’s 2nd Northern General Hospital at Leeds General Infirmary. Following the outbreak of war she was called up into the Territorial Force on 30 September 1914 and went out to France on 9 October 1914. She was promoted to Sister in 1916 and served in various hospitals and casualty clearing stations in France.

In March 1918 she was severely wounded in a bombing raid when an ammunition train exploded near Lillers Casualty Clearing Station. This event ended her service overseas and after convalescing with her sister in Spennymoor she spent the remainder of the war nursing at Leeds.

For distinguished service in the field and gallantry during the bombing raid, Kate Maxey was awarded the Military Medal and the Royal Red Cross Medal.

“For gallantry and conspicuous devotion to duty displayed during a recent hostile bombing raid on a Casualty Clearing Station. Although severely wounded herself, she went to the aid of another sister, who was fatally wounded, and did all she could for her. Later, although suffering severe pain, she showed an example of pluck and endurance which was inspiring to all.”

Kate Maxey was also one of the first recipients of the Florence Nightingale Medal awarded by the International Red Cross Committee in 1920.

In retirement she returned to Spennymoor, and she died in Bishop Auckland.

Kate’s story is now commemorated in ‘Behind the Lines – A Great War Nurse and the Fight for Survival’, a documentary film by Lonely Tower Film & Media for Tudhoe & Spennymoor Local History Society.

The people of Tudhoe and Spennymoor who lived through the Great War all have individual stories to tell, their lives were both ordinary and extraordinary, tested by the global conflict that changed everything. This documentary film tells the story of Sister Kate Maxey, of RAMC medics Joseph Willis and Samuel Bott and of school teacher John Leckie. Four individuals who fought to save lives while the world around them burned.

See the link to exhibition story boards at the bottom of this page, and find out more about this person at:

Edith Elizabeth Appleton – A Nurse at the Front
http://anurseatthefront.org.uk/names-mentioned-in-the-diaries/other-people/medical-colleagues/sister-kate-maxey/