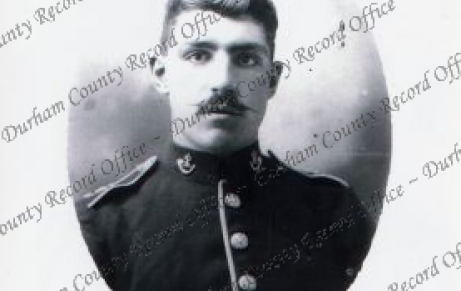 Message to the finder of this letter DLI Museum

Message to his wife DLI Museum

Thomas Hughes was a soldier in the Durham Light infantry. As he crossed the English Channel from Southampton to St. Nazaire with the 2nd Battalion DLI on 9 September 1914, at 7.52pm he dropped a message in a green ginger beer bottle over the side of the ship.

The message was for his wife ‘just to see if it will reach you’:

Finder of this letter
Sir or Madam
Youth or Maid
Would you kindly
forward enclosed letter and earn the
blessing of a poor British soldier,
on his way to the front this 9th
day of September 1914.
Signed
Pte T. Hughes
2nd Durham L I
3rd Army Corps
Expeditionary Force

Dear Wife
I am writing this note on the
Boat and dropping it into the sea, just
to see if it will reach you. If it does
sign the envelope on the right hand bottom
corner where it says receipt, put the
date and hour of receipt and your name
where it says signature, and look
after it well. Ta-Ta Sweet for the present
Your Hubby
x x x

Sadly, Thomas was killed in action less than two weeks later and the message never reached his wife, but the bottle was dredged up off the Essex coast 85 years later and delivered to his daughter in New Zealand.

Today, the message and bottle are part of the DLI Collection: http://www.durham.gov.uk/dlicollection

Thomas’s army service records have survived in The National Archives and can be viewed on the Ancestry website.

Thomas Hughes married Elizabeth Ann Barron [ grandaunt of my wife ] on the 25th January 1912. Marriage solemnized at the Register Office in the District of Colchester in the County of Essex.