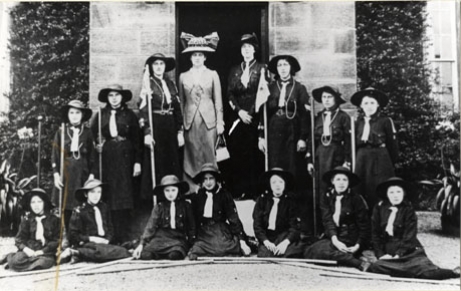 Girl Guiding began in Durham in 1909 with the first unit set up being the Hawthorn Guides which then merged into the Girl Guide movement in 1910. The following year the 1st Seaham Guides were established, led by Miss Nora Dillon. The Pemberton family were also heavily involved in the Girl Guides within County Durham, often hosting events at their residence of Belmont Hall. Mrs Pemberton held the role of County Commissioner and their oldest daughter, Miss Penelope Pemberton was leader of the Hawthorn Guides at some point.

From its formation, the guide movement grew steadily in County Durham. In August 1914 there were 200 guides, by July 1915 700 and during 1916 this had grown again to 1000 guides. A newspaper article dated 1 October 1917 stated there were then 1438 guides, with 52 companies being registered since 1910. Indeed by October 1917, as the guides spread to all areas of County Durham, it was suggested they were “set fair” to overtake the Boy Scout organisation. Groups for younger girls called Brownies were introduced in July 1914 and, although less in number, they did join in events with the guides. In October 1917 there were 121 brownies in County Durham

The guiding movement accepted girls from any “grade of society” between the ages of 11 and 18. Girl Guides promised on their honour to “be loyal to God and the King”, “to help others at all times” and “to obey the guide law”. Discipline, obedience to those in authority and good manners were important, as was the correct wearing of uniform. Guides in Durham were taught a range of skills, in keeping with their motto to “be prepared”. More traditional skills were taught, preparing girls for later life, such as cookery, housekeeping, care of children and first aid. However, there were a large range of other activities taught alongside these such as map reading, camping, natural history and signalling. Physical activities including swimming, cycling and outdoor games were enjoyed and the Seaham guides, under the leadership of Miss Dillon, were one of the first companies to go camping.

Being part of the Girl Guides was seen as highly beneficial to the girls. Reports from parents in County Durham showed they felt that in addition to finding new interests and amusements, the girls learnt skills which would make them more efficient citizens and would be useful to them in later life. It was common for judges to recommend children sent to court for being ‘unruly’ to join the Girl Guides, or the Scout Movement, to help them move forward.

During 1913 the Durham guides took part in inspections by people such as the Durham County Commissioner and the Marchioness of Londonderry who was County President. At these inspections and events, badges were awarded and displays of skills learnt were given.

The following year on 31 July 1915, the Dean of Durham spoke to a group of guides from various companies from across the county at an event at Hawthorn House, again stressing the importance of the Girl Guides to the war effort. He spoke to them of how no-one was too young for service and it was not only the men who could play their part.

Durham County Girl Guides helped the war effort in a wide variety of ways. Money was raised by various companies for hospitals and a home for Blinded Soldiers and Sailors. The Seaham guides held a garden party for soldiers’ wives in 1918. Guides collected useful objects, either to be sold to raise money or as much needed supplies. Newspaper articles from October 1917 record eight guide companies collecting 5 tons 7 cwts of waste paper to be sold. The Croxdale Guides collected eggs, Chester-Le-Street firewood and Lumley hoped to collect chestnuts. Other guides sent parcels to local men serving overseas and helped their local communities in roles such as gardening and agricultural work.

Some guides helped in the various Voluntary Aid Detachment (VAD) hospitals in County Durham, a role the Seaham’s guide leader Miss Dillon was heavily involved in. The Girl Guides’ training before the war in first aid skills and stretcher bearing would have been highly useful in this role. In addition to working at the VAD hospitals, guides also worked in war hospital supply depots and fleet vegetable depots.

County Durham was one of the first counties to obtain war service badges, granted on a recommendation from a guide Captain and approved by the County Commissioner. They were awarded to guides and guide officers who had worked over a certain number of hours in places such as VAD hospitals and public departments or in work such as agricultural tasks. They were also awarded to guides who had made over a certain number of garments such as socks and shirts sent to men serving or refugees.

As the Girl Guide movement spread throughout County Durham, there was a great need for additional guide leaders. An article from March 1917 tells of the inauguration of an officer’s training company at St Hild’s College, Durham. Reports from St Hild’s College record that at some point in 1917 there were 100 cadets being trained in the aims and principles of the Girl Guides. Records tell of the cadets spending “a jolly morning in the woods initiating them into the mysteries of guide signs, tracking and stalking”. It was hoped this training would enable many more guide companies to be set up across County Durham with thousands more guides being able to join.

During the war years the Girl Guides met for rallies, including one on Palace Green in September 1917 which was attended by around 700 guides. An empire day service was held in Newcastle Cathedral in May 1917 with around 800 guides present. A parade took place in the streets which was witnessed by large crowds. This was the first public appearance of the guides.

As well as the rallies and the hard work done by the guides during the war, the girls also had chances to have fun and spend time together. There are reports of the guides going on a trip to the Derwent Water holiday camp enjoying walking in the hills.

So far we have discovered two photographs of the 1st Hawthorn Girl Guides taken on 5 August 1914, the day after war was declared. Their leader was Miss Pemberton of Hawthorn Tower, and she was accompanied by the Hon. Agnes Liddell of Ravensworth Castle.

There is another photograph of the Seaham and Hawthorn Guides, where they are accompanied by Lady Londonderry in the centre of the group with Miss Dillon on her left and Miss Pemberton on her right. Miss Dillon must have been the leader of the 1st Seaham Guides. This has now been identified as the opening of the new Guide Headquarters at Dene House, Seaham Harbour, on 3 October 1913. Miss Dillon was County Commissioner during the Second World War.

Kelly’s Durham Directory of 1914 has quite a lot of information about the Boy Scouts organisation in County Durham but there is no comparable information for the Girl Guides.

Sources:
With great thanks to the archives of Girl Guiding Durham North and Durham South for the loan of their war time records.