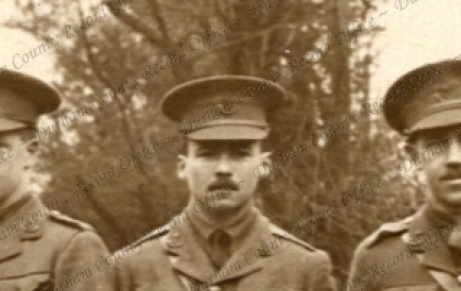 Detail from group photograph of the officers of the 13th Battalion, The Durham Light Infantry, March 1915 DCRO: D/DLI 7/75/26

Detail from group photograph of the officers of the 13th Battalion, The Durham Light Infantry, March 1915 DCRO: D/DLI 7/75/26

Group photograph of the officers of the 13th Battalion, The Durham Light Infantry, March 1915, including Butterworth - back row DCRO: D/DLI 7/75/26

Most promising composer of his generation, killed at the Somme

George Sainton Kaye Butterworth is best remembered for his cycle of songs entitled ‘A Shropshire Lad’. These 11 songs took their words from A.E. Housman’s poems of that name. His works, many of which he destroyed before going to the Front, tapped into a pastoral idyll which drew upon folk music and dance for their inspiration.

When the war started he left Oxford to join up. He served with the 13th Battalion of the Durham Light Infantry as a Second Lieutenant. While with the DLI he gained great affection for the men of the area:

“It is to be hoped that those who grumble at national slackness will make an exception in favour of the working people of Durham county; the large majority of these men have given up good jobs and comfortable homes for the best reasons, and are willing to stand almost anything…”

Behind the Lines: The music and composers of the First World War: George Butterworth
https://musicbehindthelines.org/composers/featured-composers/george-butterworth/

ALL MY LIFE’S BURIED HERE – The Story of George Butterworth
A documentary film from British Independent Hajdukino Productions
https://www.georgebutterworth.co.uk/

The Lads In Their Hundreds

Banks of Green Willow: The Life and Times of George Butterworth