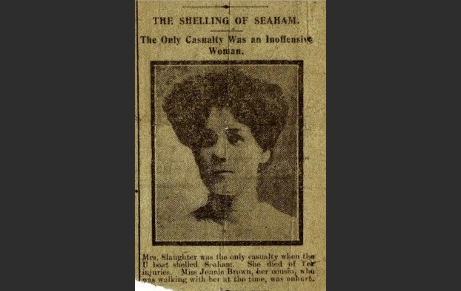 Mary Slaughter, whose death was reported in the local press.

Mary Slaughter, whose death was reported in the local press.

The unluckiest woman in Seaham

On the evening of 11 July 1916, Mary Slaughter was walking with her cousin Jennie Brown. They had just spent the evening in Dawdon and were making their way back to New Seaham by taking a short-cut through the colliery yard. Mary came from Hebburn, where she lived with her husband John, a blacksmith. It is thought that Mary was staying in Seaham with relatives because an airship attack on Hebburn in 1915 had made her nervous.

Just before 10:30 Mary and Jennie heard a loud noise and a flash in the distance. A submarine just outside the harbour was firing shells at the town. Mary was struck and seriously injured. Jennie lay flat on the ground and escaped injury. Mary was taken to Sunderland Infirmary but died of her injuries the next morning. (DCRO, UD/Sea 36)