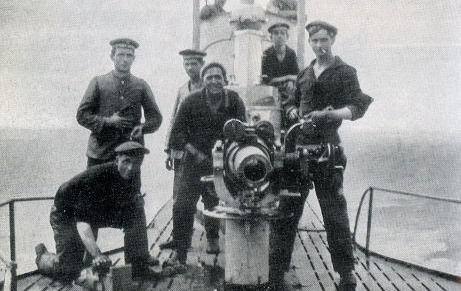 Colliery town under attack in July 1916

If you are familiar with the history of County Durham you may know that Hartlepool was bombarded by the German fleet in 1914, but did you know that Seaham also came under enemy fire in 1916?

Although many of the shells landed in nearby fields, one woman, Mrs. Mary Slaughter of Hebburn, was hit by an exploding shell and severely injured as she was walking through the colliery yard with her cousin. She died in hospital the next morning.

At 14 Doctor Street the family of miner Carl Mortenson had a lucky escape. The nose of a shell demolished part of their back yard wall, drilled a hole clean through the kitchen wall, flew across the room and landed near the front door, but did not explode. None of the occupants were harmed. Mrs. Mortenson was in the kitchen at the time, and the shell missed her. The rest of the family were in bed upstairs.

You can see a photograph of the houses in Doctor Street on the East Durham Then and Now website:
http://www.east-durham.co.uk/index1.htm
Go to Seaham Old Photographs > Streets >Colliery Streets. The Doctor Street photo is numbered A35, on the second page of the photo gallery.

Doctor Street was the furthest street from the sea, so the submarine shell had a long way to travel. Ironically the street was originally named German Row because it had such a good view of the German Ocean (the North Sea was known as the German Ocean until the early 20th century).

Imagine the fear aroused by this surprise attack. As far as we know this was the only incident where a submarine fired shells inland along the County Durham coastline in the First World War. And the timing could not have been worse for the families who were receiving the grim news of the casualties on the Somme. Even poor Mary Slaughter had come to New Seaham because she thought it would be safer than risking the zeppelin air raids on her home town of Hebburn.

Discover more about the submarine attack by following the links at the bottom of this page.