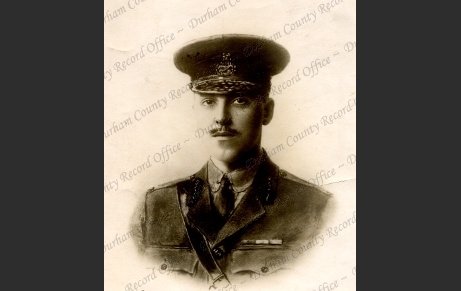 Only two brothers were awarded the Victoria Cross during the First World War – George and Roland Bradford of Witton Park, County Durham. Roland was born at Carwood House, Witton Park, in February 1892, the fourth – and youngest – son of George Bradford, a colliery manager.

In 1910, aged 18 years, Roland Bradford joined the 5th (Territorial Force) Battalion DLI in Darlington, and then in 1912 was commissioned as a Regular officer in the 2nd Battalion DLI. In September 1914, 2 DLI sailed for France, and within days had suffered, in a few hours, almost as many casualties as the entire DLI had lost in the Boer War. In ‘D’ Company, the only officer to survive was Roland Bradford.

In February 1915, Lieutenant Bradford was awarded the newly-created Military Cross and was rapidly promoted, taking command of the 9th Battalion DLI in August 1916 as a Temporary Lieutenant Colonel, though his permanent rank was still only Lieutenant and he was only twenty-four years old.

In September 1916, Roland Bradford led 9 DLI in the fighting on the Somme, and then, on 1 October during an attack on the German trenches at Eaucourt l’Abbaye, took control of another battalion, 6 DLI, after its commanding officer had been wounded. For his leadership and bravery during the attack under heavy fire, Roland Bradford was awarded the Victoria Cross, which was presented to him by King George V during an open air ceremony in Hyde Park in June 1917.

In recognition of his abilities, Roland Bradford was given command of the 186th Infantry Brigade in early November 1917 and reluctantly left 9 DLI. The career of Brigadier-General Bradford VC MC, however, lasted just twenty days. During the Battle of Cambrai on 30 November 1917, he was killed by a German shell near his headquarters in Bourlon Wood and was buried in Hermies British Cemetery. He was twenty-five years old.

After the war, Mrs Amy Bradford attended Remembrance Day ceremonies in Folkestone wearing the two VCs awarded to her sons, George and Roland. She died in 1951.

Victoria Cross citation of Lieutenant (Temporary Lieutenant Colonel) Roland Boys Bradford MC: London Gazette, 25 November 1916: “For most conspicuous bravery and good leadership in attack, whereby he saved the situation on the right flank of his Brigade and of the Division. Lieutenant Colonel Bradford’s battalion was in support. A leading battalion having suffered very severe casualties and the Commander wounded, its flank became dangerously exposed at close quarters to the enemy. Raked by machine gun fire, the situation of the battalion was critical. At the request of the wounded Commander, Lieutenant Colonel Bradford asked permission to command the exposed battalion in addition to his own. Permission granted, he at once proceeded to the foremost lines. By his fearless energy under fire of all descriptions, and by skilful leadership of the two battalions, regardless of all danger, he succeeded in rallying the attack, captured and defended the objective, and so secured the flank”.


Where to find more about this person:
The Bradford Brothers Website: http://www.thebradfordbrothersofwittonpark.org.uk/bradford_roland01.php

His medals are in the DLI Collection: https://www.dur.ac.uk/library/asc/dlimedals/

To commemorate the 100th anniversary of Roland Bradford’s death on 30 November 2017:
Commonwealth War Graves Commission – The Story of the Boy Wonder
https://www.cwgc.org/learn/news-and-events/news/2017/11/30/15/41/the-story-of-the-boy-wonder-brigadier-general-roland-boys-bradford-vc