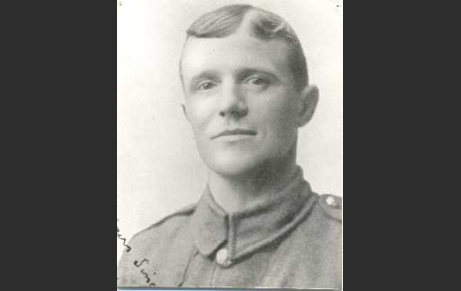 Michael Heaviside was born in Station Lane, Gilesgate, in October 1880. The Heavisides were a long-standing Durham City family, and Michael was the grandson of Thomas Heaviside, who owned a pioneering photographic business in the city. Whilst still a boy, Michael moved with his family from Durham to Kimblesworth, where his father worked in the colliery as head keeker [inspector] and Michael went to the local Council school. Later, the family moved to Sacriston.

Following the death of his mother, Michael Heaviside joined the Army and served as a stretcher bearer in the Royal Army Medical Corps in South Africa during the Boer War. After he left the Regular Army, he joined the Army Reserve and found work as a miner at Burnhope colliery. About 1913, he began work as a hewer at Oswald Pit and moved with his wife, Elizabeth, to Craghead, near Stanley.

On 7 September 1914, Michael Heaviside re-enlisted in the Army and joined the 15th (Service) Battalion The Durham Light Infantry, and went with his battalion to France in June 1915, and, once again, served as a stretcher bearer.

On 12 July 1917, Michael Heaviside returned to a hero’s welcome in Craghead, where he was presented with a gold watch. [There is film of this parade at Beamish Museum.] After the presentation, he told the crowds that he had only done his duty and that he was proud to have brought honour to Durham and to Craghead. A few days later, Private Heaviside travelled by train to London and was presented with his Victoria Cross by King George V.

After the war, Michael Heaviside returned to work as a miner at Craghead. On 26 April 1939, he died at his home at Bloemfontein Terrace, aged just 58 years, his health damaged by his years underground and his time on the Western Front. His funeral was at St Thomas’s Church, Craghead.

In July 1957, 40 years after his ‘Welcome Home’ parade, Michael Heaviside’s medals were presented by his family to the DLI Museum during a parade at the DLI’s Depot at Brancepeth Castle.

Victoria Cross citation for 4/9710 Private Michael Heaviside, 15th (Service) Battalion DLI, London Gazette, 8 June 1917. “For most conspicuous bravery and devotion to duty. When the Battalion was holding a block in the line a wounded man was observed about 2 p.m. in a shell hole some sixty yards in advance of our block and about forty yards from the enemy line. He was making signals of distress and holding up an empty water bottle. Owing to snipers and machine gun fire it was impossible, during daylight, to send out a stretcher party. But Pte. Heaviside at once volunteered to carry water and food to the wounded man, despite the enemy fire. This he succeeded in doing, and found the man to be badly wounded and nearly demented with thirst. He had lain out for four days and three nights, and the arrival of the water undoubtedly saved his life. Pte. Heaviside, who is a stretcher bearer, succeeded the same evening, with the assistance of two comrades, in rescuing the wounded man.”

Where to look for more information about this person:
London Gazette, 8 June 1917: https://www.thegazette.co.uk/London/issue/30122/supplement/5705

His medals are in the DLI Collection. https://www.dur.ac.uk/library/asc/dlimedals/

In 1917, a newspaper report states that Elizabeth Heaviside was living with her children in Front Street, Craghead, but there is no other evidence for the family living at this address.

Between October 1936 and October 1937, Michael and Elizabeth Heaviside moved from 19 Greylingstad Terrace to 14 Bloemfontein Terrace. Michael died there in April 1939.

Film of the arrival of Michael Heaviside VC in Stanley