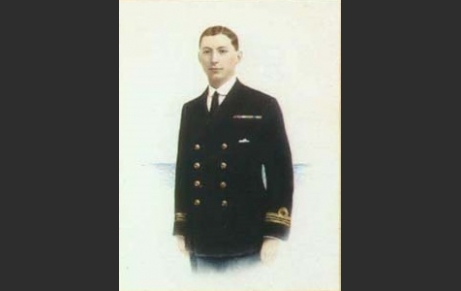 Only two brothers were awarded the Victoria Cross during the First World War – George and Roland Bradford of Witton Park, County Durham. George was born in Witton Park in April 1887, the second son of George Bradford, a colliery manager. In 1894, the family moved to Darlington, finally settling at Milbanke House, Darlington, in 1908. By then George Bradford had joined the Royal Navy as an Officer Cadet and had made his name in the boxing ring as the Navy’s welter-weight champion. In 1909, Sub Lieutenant Bradford rescued an unconscious boy from below decks in a sinking trawler and was promoted to Lieutenant for his bravery. During the First World War, George Bradford only saw action once before 1918, when his ship, HMS ‘Orion’, fought in the Battle of Jutland in 1916.

In 1918, George Bradford volunteered to take part in a daring naval raid on the Belgian coast at Zeebrugge. During the raid, on 23 April 1918 – St. George’s Day – Lieutenant Commander Bradford was in command of storming parties on a commandeered River Mersey ferry, HMS Iris II. During the raid, he was hit by machine gun fire and fell into the sea. It was his 31st birthday. George Bradford’s body was later recovered and was buried in Blankenberge Communal Cemetery, Belgium.

George Bradford’s Victoria Cross was presented to his mother by King George V at Buckingham Palace in April 1919. It was her third visit to the palace to receive medals to her three dead sons. After the war, Mrs Amy Bradford attended Remembrance Day ceremonies in Folkestone wearing the two VCs awarded to her sons, George and Roland. She died in 1951.

Victoria Cross citation for Lieutenant-Commander George Nicholson Bradford, Royal Navy, London Gazette, 17 March 1919. “For most conspicuous gallantry at Zeebrugge on the night of the 22nd-23rd April 1918. This officer was in command of the Naval Storming Parties embarked in ‘Iris II’ When ‘Iris II’ proceeded alongside the Mole great difficulty was experienced in placing the parapet anchors owing to the motion of the ship. An attempt was made to land by the scaling ladders before the ship was secured. Lieutenant Claude E. K. Hawkings (late ‘Erin’) managed to get one ladder in position and actually reached the parapet, the ladder being crashed to pieces just as he stepped off it. This very gallant young officer was last seen defending himself with his revolver. He was killed on the parapet. Though securing the ship was not part of his duties, Lieut.Commander Bradford climbed up the derrick, which carried a large parapet anchor and was rigged out over the port side; during this climb the ship was surging up and down and the derrick crashing on the Mole; waiting his opportunity he jumped with the parapet anchor on to the Mole and placed it in position. Immediately after hooking on the parapet anchor Lieut.Commander Bradford was riddled with bullets from machine guns and fell into the sea between the Mole and the ship. Attempts to recover his body failed. Lieut.Commander Bradford’s action was one of absolute self-sacrifice; without a moment’s hesitation he went to certain death, recognising that in such action lay the only possible chance of securing ‘Iris II’ and enabling her storming parties to land.”