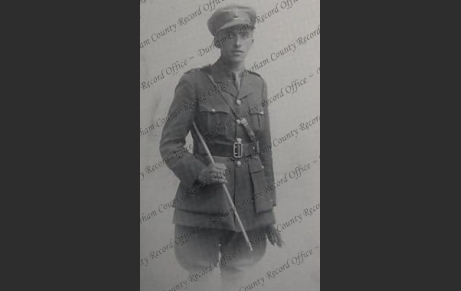 John Youll was born in June 1897 in Thornley, County Durham, the youngest son of Richard and Margaret Youll. After he left Thornley Council School, he attended technical classes in Wingate before starting work as an apprentice electrician at the local colliery.

In July 1916, he joined the Royal Engineers and served on the Western Front. Then in August 1917, he was commissioned as an infantry officer in the Northumberland Fusiliers and was attached to the 11th (Service) Battalion. He was Mentioned in Despatches during fighting at Polygon Wood, near Ypres.

In October 1917, the 11th Battalion Northumberland Fusiliers was sent from France to northern Italy, where the Italian Army was fighting a combined Austrian and German Army. There, during an enemy attack on 15 June 1918, Second Lieutenant Youll won the Victoria Cross for his leadership, bravery, and for setting “a magnificent example to all”. John Youll was also awarded the Italian Silver Medal for Valour.

Second Lieutenant John Youll was killed in action on 27 October 1918 during the crossing of the River Piave under fire and was buried at Giavera British Cemetery, Veneto, Italy. He was 21 years old. News of his death reached Thornley on Armistice Day – 11 November 1918.

Victoria Cross citation for Temporary Second Lieutenant John Scott Youll, 11th Battalion Northumberland Fusiliers, London Gazette, 25 July 1918. “For most conspicuous bravery and devotion to duty during enemy attacks when in command of a patrol which came under the hostile barrage. Sending his men back to safety, he remained to observe the situation. Unable subsequently to re-join his company, 2nd Lt. Youll reported to a neighbouring unit, and when the enemy attacked he maintained his position with several men of different units until the troops on his left had given way and an enemy machine gun had opened fire from behind him. He rushed the gun and, having himself killed most of the team, opened fire on the enemy with the captured gun, inflicting heavy casualties. Then, finding that the enemy had gained a footing in a portion of the front line, he organised and carried out with a few men three separate counter-attacks. On each occasion he drove back the enemy, but was unable to maintain his position by reason of reverse fire. Throughout the fighting his complete disregard of personal safety and very gallant leading set a magnificent example to all.”

Where to look for more information about this person:
London Gazette, 25 July 1918: https://www.thegazette.co.uk/London/issue/30811/supplement/8723

The VC and DCO: http://lib.militaryarchive.co.uk/library/Biographical/library/The-VC-and-DSO-Volume-I/files/assets/basic-html/page301.html

How Second-Lieutenant Youll Met His Death: A Glorious Example to His Men

This is a great thing to be doing. Is there any chance that the parents are still alive?.