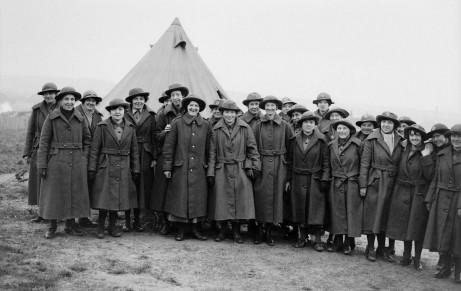 Priscilla Parkinson was born in June 1893 near Shildon. She was one of six children born to John and Mary Jane Parkinson, although one of these children did not survive childhood. Priscilla’s parents married in August 1887 at which time John was working as a farmer. John died in March 1895 leaving Mary Jane to care for five children under the age of eight. By the time of the 1901 census the family had moved to Shildon and Priscilla’s mother was working as a charwoman.

Priscilla left school at the age of 13 and at the time of the 1911 census she was no longer living at home. She was working as a housemaid in the household of General Medical Practitioner Henry Adamson Fielden in Shildon. Her older brothers remained living with their mother working on the North Eastern Railways (NER).

Priscilla married Thomas Henry Thompson in 1913 and the couple had a son William in November of the following year. Thomas was a railway worker for the NER and had originally joined the 6th Durham Light Infantry (DLI) in 1911. As part of the territorial force Thomas was embodied for service when war broke out and, following training, he joined the expeditionary force in France in April 1915 as part of the DLI.

Having completed his term of engagement, Priscilla’s husband Thomas returned home to her and their son for four months before re-enlisting into the Royal Navy. Whilst Thomas was serving with the Navy, Priscilla enlisted into the Women’s Army Auxiliary Corps (WAACs) to serve as a cook. She enlisted on 13 February 1918 and was posted to “Hotel Gateshead” at the beginning of March. Priscilla was due to be posted to Black Watch North Camp in Ripon on 9 April 1918. However, she was discharged before her posting due to a “breach in conditions” on 17 March 1918.

In 1925, Priscilla’s husband Thomas filed for a divorce, although the exact reasons for this are unknown. The co-respondent in the petition for this divorce was William Griffith. Although no specific record of a marriage has been found, Priscilla is recorded as Priscilla Griffith on the death register suggesting Priscilla and William were subsequently married. Priscilla died in Durham in 1969.