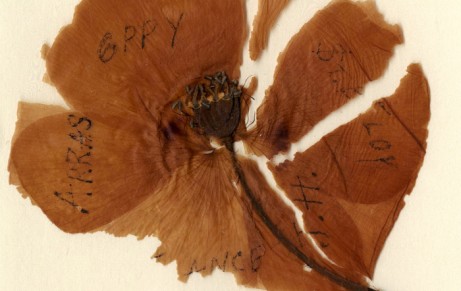 Poppies sent home from France in 1917

Two fragile pressed poppy flowers survive as a poignant reminder of John Harkess, a soldier from Washington in County Durham who served with the Leeds Pals in the First World War. John carefully wrote the names of several places where he had served in France, and his initials, on the delicate petals before sending the poppies home to his wife Ann in 1917.

Ann’s great niece tells us more about the family:

JOHN HARKESS AND ANN WATSON
‘As his name appears on the war memorial in Birtley, I presume that John Harkess originally came from there; however, on the marriage certificate his address is given as Usworth and on the wedding-cake card likewise: my guess is that, as they were both from working-class families, they didn’t start married life in a home of their own, but lived with parents – his mother, presumably, at first, then I’m guessing my great aunt went back to live with her parents as everything addressed to her was at the Wood Row, Washington, address. Presumably, also, they got married when he signed up as a soldier. The two photographs already in the Archive look to have been taken at their wedding, judging from the way that her hair is arranged as compared with the photograph taken with John as a soldier, and her particularly attractive blouse.

Certainly, she lived in Wood Row caring for her parents – both, and then her father when her mother died, until she married Thomas Burt about 20 years later. He was then retired (he had been Colliery Manager at F Pit in Washington, then Seaham) and widowed and lived in Low Fell. The houses in Wood Row were in a poor condition and, according to my mother, exactly like the colliery cottages at Beamish Museum. She got quite excited when we first saw them.

I’m interested that the wedding was at the Wesleyan Methodist Church in Washington, as my mother, who lived with her grandparents in Wood Row for some time, spoke of them attending the Parish Church and the rector, Canon Lomax, visiting – apparently he rode a horse; also I remember going to church with my great aunt (we lived with her in Low Fell until I was about seven) at Lamesley Parish Church. Maybe she’d broken away from the Church of England to join a church with more young people, or perhaps the whole family were Methodist at one time, but I’m not convinced about that. She could have met John there, of course! Also she had a brother, Tom, who was a Methodist Lay Preacher.

Ann was the second daughter; my grandmother (Margaret – ‘Meggie’) was eldest daughter and was expected to stay at home when she left school; however, she was having none of it and got herself a job until she married my grandfather and left home, hence my great aunt was the one who took on the domestic, caring role. There was another sister, Mary, and a brother, John.’

John Harkess was killed in action during the German Offensive in Picardy, at the Defence of Bucquoy on 27 March 1918. The events of the time are described in Everard Wyrall’s history of The West Yorkshire Regiment in the War, 1914-1918:

‘Meanwhile the 15th/17th West Yorkshires (of the 31st Division) had been heavily engaged with the enemy. On the night of 25th March the battalion had withdrawn from its position near Judas Farm (near St. Leger) to the Boyelles-Ervillers road. On the 26th a further withdrawal took place to the Cemetery at Hamelincourt, though the position was swept by heavy artillery and machine-gunfire, causing many casualties. It is here that a very gallant action won for the 15th/17th Battalion the third Victoria Cross gained by the West Yorkshire Regiment in the War.

The story is as follows: London Gazette, dated 7th June, 1918: No. 19/11 Sergeant Albert Mountain, West Yorkshire Regiment (Leeds). “For most conspicuous bravery and devotion to duty during an enemy attack, when his company was in an exposed position on a sunken road, having hastily dug themselves in. Owing to the intense artillery fire, they were obliged to vacate the road and fall back. The enemy in the meantime was advancing in mass preceded by an advanced patrol about 100 strong. The situation was critical, and volunteers for a counter-attack were called for. Sergeant Mountain immediately stepped forward, and his party of ten men followed him. He then advanced on the flank with a Lewis gun and brought enfilade fire to bear on the enemy patrol, killing about 100. In the meantime the remainder of the company made a frontal attack, and the entire enemy patrol were cut up and thirty prisoners taken. At this time the enemy main body appeared and the men, who were numerically many times weaker than the enemy, began to waver. Sergeant Mountain rallied and organised his party and formed a defensive position from which to cover the retirement of the rest of the company and the prisoners. With this party of one non-commissioned officer and four men he successfully held at bay 600 of the enemy for half an hour, eventually retiring and rejoining his company. He then took command of the flank post of the battalion, which was “in the air”, and held on there for twenty-seven hours until finally surrounded by the enemy. Sergeant Mountain was one of the few who managed to fight their way back. His supreme fearlessness and initiative undoubtedly saved the whole situation.”

The next day [27th March] the withdrawal was continued to a position south–east of Moyenneville where the enemy made a most determined attack. His machine-gun fire here was extraordinarily intense and the 15th/17th again suffered many casualties. So heavy was the fire that the wounded could not be withdrawn. Both flanks of the battalion were “in the air” and the enemy attacked the West Yorkshires from flank and rear. Only a small number (not given) of men and four officers succeeded in escaping, but the greater part of the battalion, either owing to their wounds or the rapidity of the enemy’s encircling movement, could not get away and were either killed fighting or captured.’

Good day and thank you for sharing this wonderful history of Durham at War. I would like to ask the question as to who one would write to seek correction to the correct rank held by John Harkess - Force No.: 42139. He was a Lance Corporal yet his rank on his head stone incorrectly reflects he was holding the rank of Private.