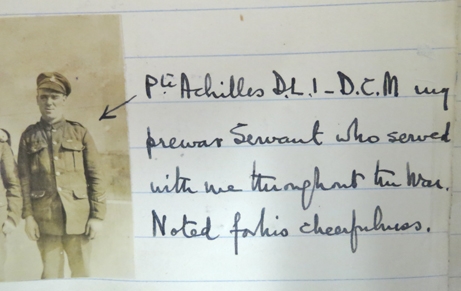 Prior to the war, Thomas Achilles had been a servant to the Morant family and joined his employer in the 10th Battalion, Durham Light Infantry. What is known about him comes from the letters written by Colonel Hubert Morant to his wife. In these letters it seems that Morant could become quite exasperated with Achilles yet also found him indispensible and a source of comfort in the trying circumstances.

It seems he was also an accomplished sportsman, often doing well in the battalions sports events. An article in Morant’s memoir, dated 29 March 1915, when the battalion was in training at Aldershot, tells us that ‘Private Achilles, an old Elswick Harrier, came out top in this test, and secured the battalion championship with two firsts and two seconds…the meeting was held under real active service conditions. The competitors ran in service kit, and the course was a compound of gravel and undulating soil…’

On 20 June 1915, Morant wrote “Achilles sewed my buttons on so badly that I sent him up for a Tour in the Trenches. I saw him up there working
away at filling sandbags , working quite hard too, which struck me immensely…[he told Parke] he felt so frightened when he was cold that he had to work to keep himself warm.” In January 1917 Morant claimed it “will be rather a nuisance” when Achilles goes on leave. In a letter dated 12 October 1917, Morant told his wife “Achilles fell down the dugout steps last night and his head and eye are all bandaged up, but he is still cheerful…”

The letters also portray Achilles as both loyal and happy-go-lucky, he followed Morant when he became Brigadier. On 1 April 1918 Morant wrote “Achilles has been employed cleaning up round here, draining shell holes and reburying half protruding corpses.” On 6 April 1918 he wrote “Achilles was very pleased with the cutting of my Order so I am giving it to him. He is having the copy of Couper’s letter framed. He wears the Red Bugle still…”

On 11 March 1920, Achilles received his own recognition. It appeared in the London Gazette that he had been awarded the Distinguished Conduct Medal for his committed duty throughout the war. The citation particularly notes 16 September 1916 at Guedecourt, and how on 11 April 1917 near Wancourt he found stretcher bearers and bandaged wounded men whilst under heavy fire. The London Gazette: (https://www.thegazette.co.uk/London/issue/31819/supplement/3007)

Thank you very much for your comments. It is always fantastic to hear from relatives.
Do you have anything that you would like to add to the profile? Did your grandfather talk about his experiences in the war?