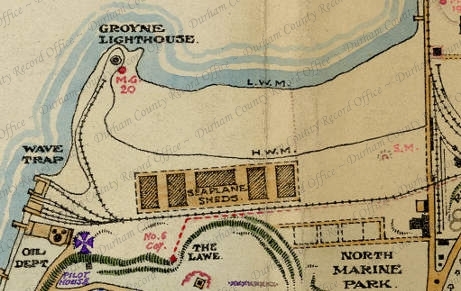 A detail of a plan of the base in the medical journal of CJG Taylor The National Archives, ADM 101/581

Photograph of position of sea plane base, South Shields, 2015

Defending the skies of the north east

The seaplane base was established in South Shields during the summer of 1916. The base was designated a depot for the receipt and preparation of seaplanes. As such it was at an advantageous distance between Killingholme, Lincolnshire and bases in Scotland to be used as a stopping off and re-fuelling point. Although its primary function was the maintenance of seaplanes a number of missions were also flown from the base.