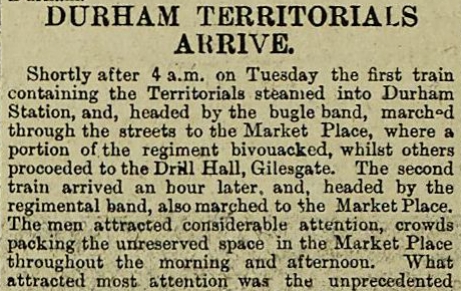 The Durham Advertiser described the excitement in Durham City on Tuesday 4 August 1914 as Durham Light Infantry (DLI) soldiers returned from their annual camp in North Wales and set up a field kitchen in the Market Place to encourage recruitment.

Large crowds gathered at North Road railway station to meet the soldiers of the 8th Battalion DLI, recalled from their annual training at Conway. The first train arrived at 4am and the second at 5am.

Bands played at the head of the columns as the troops marched to the Market Place. Some soldiers set up camp in the Market Place and the remainder dispersed to the Drill Hall in Gilesgate nearby. Throughout the day people gathered to watch the unprecedented sight of men cooking food in the open near the town hall, and singing patriotic songs, against a backdrop of artillery guns being moved through the streets in preparation for coastal defence duty near Sunderland.