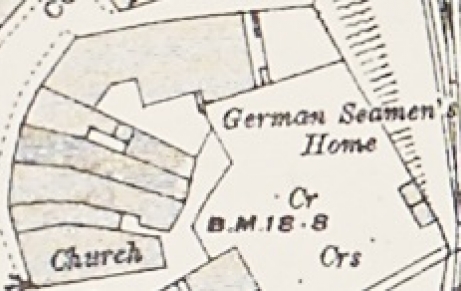 Originally, the German Seamen’s mission committee was set up in South Shields in 1880 to look after German immigrants in South Shields and sailors visiting the Tyne. The Seamen’s Home was built in 1906 for £5,000 and inaugurated in 1909.

During the First World War the mission was closed and the building used as the 2nd Durham Voluntary Aid Detachment hospital. Work of the mission began again in the 1920s. During World War II, staff of the seamen’s mission were either interned or deported to Germany. The mission was recommenced in 1952.

A report of the arrest of 20 residents, including the pastor, survive in the German State Archives in Freiburg. (RM 3/5371)

This was recorded as an institution to be put under surveillance when at war, which may have been due to Gustave Mell lodging there.

The records of the Church and Mission can be found at the Tyne and Wear Archives.

The following information comes from records held at the archives at the Museum of the Order of St John, and is used with their kind permission. Reference OSJ/1/1/12/4:

Hospital: This is a Seamans’ Home which has been taken by the St John’s Brigade for the purpose of a hospital.

VADs: 5 work in shifts. All live out and are unable to give full time.

Remarks: This hospital is in good order, the patients are drawn from No. 1 Northern General and from the Barracks.