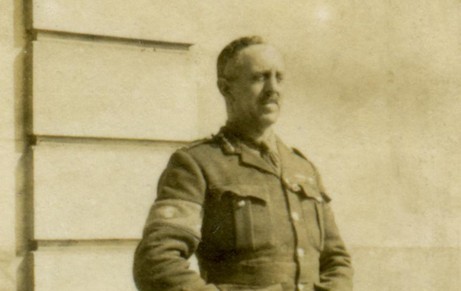 Hubert Horatio Shirley Morant, the son of Lieutenant-General Horatio Harbord and Katherine Selena Morant, was born in Netley, Hampshire on 27 December 1870. After being educated at Weymouth College, Charterhouse and the Royal Military Academy, Sandhurst, he was commissioned as a second lieutenant in the Durham Light Infantry (DLI) on 15 October 1889 and was immediately sent to Egypt where he served with the 1st Battalion and was promoted to Lieutenant in 1892.

In 1898 he was seconded to the Egyptian Army and was promoted to captain in August 1899. After taking part in the Khartoum expedition he was attached to the Sudan Government until 1908 and for his services during the period was mentioned in dispatches and awarded the Orders of Osmanieh and Medjidieh. In 1910 he was promoted to major and early in 1914 married Isabella Helen Coppin-Straker in Hexham and they had two daughters and a son, who was later a captain in the DLI.

Major Hubert Horatio Shirley Morant was commanding the Durham Light Infantry Depot at Newcastle when Britain entered the First World War. He oversaw the mobilisation of reservists until on 19 August 1914 he was made Colonel and put in command of the newly raised 10th Battalion, Durham light Infantry (who became known as the ‘Shiny Tenth’).

The battalion trained in the south of England before leaving Folkestone for Boulogne on 21 May 1915, the battalion moving straight on to Belgium.

As an officer in the regular army, Morant knew several other officers from his own training and earlier engagements, some of whom were keen to serve with him. Another man who served with Morant throughout his time commanding the 10th Battalion was his servant from home, Private Thomas Achilles. Records in the Morant collection suggest he was very much the master but came to respect Achilles and held an underlying affection for him.

There are three kinds of account written by Morant of his time in the war. There are his contributions to the official war diary, kept by all units, which provides details of the battalion’s operations. After the war, he wrote his memoirs, including things he sent home from the war, which also gives details of the battalion’s experiences but also his personal experiences and anecdotes concerning friends. Lastly, he regularly wrote letters to his wife, Helen. As a colonel, as well as being privy to more information, he was often the censor, and his letters provide some candid accounts of his experiences both in the war and with other officers, including voicing his not always favourable opinion of some of his seniors. As is often the case, the letters received at the front do not survive, however, Morant seems to respond methodically to what was in the letters he received, giving a sense, if sometimes cryptic, of life at home.

Both Morant and his wife were from hunting families. The 10th Battalion wore a red bugle (the Durham Light Infantry insignia) on the back of their collars. Many of these were made by Helen Morant from old hunting jackets that had been donated.

In letters home, Morant bemoaned being passed over for commanding a Brigade as others around him rose up, however, from his memoirs and later letters, it is clear that he was forever loyal to the men of the ‘Shiny Tenth’. He was eventually made a temporary Brigadier in January 1918, taking command of the 3rd Infantry Brigade, and from September that year, the 147th Infantry Brigade, remaining in France until the end of March 1919.

On 29th April he was transferred to the 1st Battalion as Commanding Officer until January 1923. He was made Brigade Commander of the Northumberland Brigade (T.A.) in May 1924, relinquishing the position in December 1927. In 1922 he had taken a lease on a property known as ‘The Hermitage’ just outside Hexham where he died on 20 September 1946. His family continued to live at The Hermitage until the last descendant died in 2013.